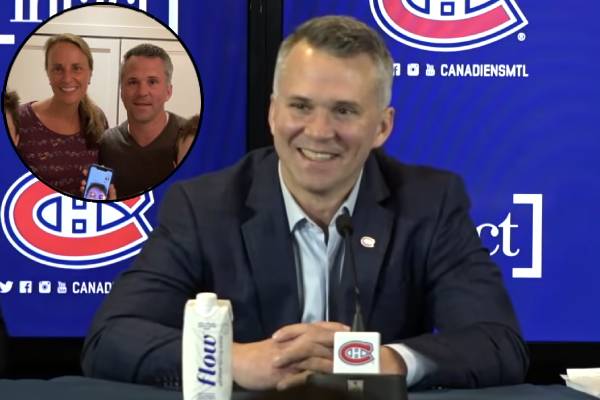 Marin St. Louis and his wife, Heather Caragol have been together since nineties. Image Source: Social Media.

Talking about his personal life, Martin is a family guy with kids. He has been married to Heather Caragol for over two decades. The couple is still happily together and leads a beautiful family. So, who is Martin St. Louis’ wife? In today’s article, let’s get to know the NHL star’s partner and their story.

Born Heather Anne Caragol, Heather Caragol came into the limelight for being a famous athlete’s wife. She is from Greenwich, Connecticut. Her family must still reside in the city. She grew up in her hometown and must have completed her formal education there.

Furthermore, the coach’s wife attended the University of Vermont and graduated with a degree in accounting in 1997. Apparently, her husband also graduated from the same university with a degree in small business management. The married duo began dating in 1996 during their senior years at the university. However, they first met over the summer between their junior and senior years

Moreover, after dating for years, the couple tied the knot on July 15, 2000. Thus, they have been together for over decades. They share a solid bond and deep affection.

Also Read: 5 Interesting Facts About The Singer Jason Paige Including His Net Worth And Love Life

Apart from blissful marital life, Heather and her husband are proud parents of three children. A few years after walking down the aisle, Martin St. Louis’ spouse gave birth to their first baby, Ryan St. Louis, on June 13, 2003. Afterward, the lovebirds welcomed Lucas St. Louis and Mason St. Louis on March 30, 2005, and 2008, respectively. All of the St. Louis siblings have followed in their father’s footsteps.

18 years old – wow where did the time go! Happy bday Ryan! Proud of the young man you are becoming. #keeppushing pic.twitter.com/U9kMPSQDvr

In addition to that, Heather knows her husband the best. For instance, in an interview, the loving wife said, she has never seen her partner’s confidence falter as he climbed the hierarchy of the league.

Besides, the St. Louis family shares a deep bond with each other. Heather’s husband often updates about his family on his social media account. Although they have busy schedules, they manage to spend quality time with each other. Hopefully, their bond will continue to grow stronger in the future.

Ryan Is A Student At Northeastern University

Martin St. Louis’ son, Ryan goes to Northeastern University. He is currently in his first/freshman year and is highly involved in the university’s ice hockey team. He has been playing since his high school days. The young athlete played two seasons with the USNTDP (USHL) and recorded fourteen goals with twelve assists in fifty games.

Moreover, the eldest St. Louis has also played in US National U18 and U17 teams. He demonstrated his exemplary skills in both teams. Also, he attended Brunswick School and had 17 goals and assists. Furthermore, he is NHL draft-eligible.

Lucas Is Committed To Hardvard

The second St. Louis decided not to follow in the footsteps of his dad and elder sibling when deciding which college hockey program he would play for in a couple of years. Instead, the defenseman is committed to Harvard University.

Moreover, Lucas is also a student at Brunswick High School. He is also involved in the school’s ice hockey team. He must be doing great in his playing career. On the other hand, the youngest St. Louis is also a passionate hockey player. He is currently involved with the team Mid Fairfield Ranger 13U AAA.

The former player and his wife must be very proud of their sons. They have already accomplished considerable success in their professional career. Let’s hope all of Heather and Martin St. Louis’ children fulfill their dreams and become some of the most successful players in the coming days.

Nonetheless, Martin St. Louis’ wife is a devoted wife and mother. Also, she is a great supporter of her family. Hopefully, she comes at ease and reveals more about her personal and professional life. We wish Heather and her family a prosperous life ahead.