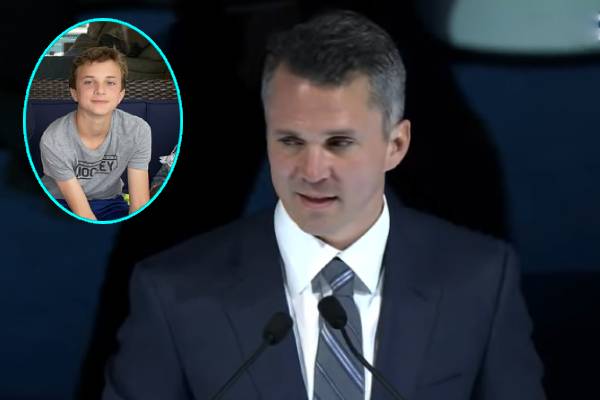 Martin St. Louis is a Canadian ice hockey coach and a former NHL player. He serves as the head coach of the Montreal Canadiens, colloquially known as Habs. Also, he previously competed for many teams, including Calgary Flames, Tampa Bay Lightning, Lausanne HC, and New York Rangers.

Aside from being a successful player and coach, the Quebec native is a family man and enjoys a blissful marital life with, Heather Anne Caragol. The pair have been married since 2000 and share three grown-up children. Thus, today let’s learn more about Martin St. Louis’ son, Mason St. Louis.

Is The Youngest Kid Of His Parents

As mentioned above, Mason St. Louis’ father and mother have been married for over two decades now. Mason was born in 2008 as the youngest kid to his parents. Before him, the St. Louis couple welcomed two lovely baby boys, Ryan St. Louis and Lucas St. Louis, on 13 June 2003 and 30 March 2005, respectively.

Furthermore, Mason’s brother, Lucas, is committed to Harvard University. He played two seasons (2019-21) for Brunswick High School. In addition, his sibling also staked for six seasons for the Mid Fairfield Rangers from 2016 to 2021. Besides that, Lucas skated on the 2021 US Under-17 Men’s Select Team that ranked 1st at the 2021 Five Nations Tournament in Visp, Switzerland. He recorded 2 assists in 3 games.

On the other hand, Mason’s big brother, Ryan, played 49 games for Brunswick High and had 17 goals and 24 assists. Moreover, he also played in US National U18 and U17 teams and recorded 14 goals with 12 assists in a total of 50 games in the USNTDP (USHL). Apart from that, the eldest St. Louis was also named to the USA U18 World Championship Team.

Also Read: How Coach Paul Hewitt’s Children Are Growing Up

Like his father and older brothers, the youngest baby boy is also passionate about ice hockey. Additionally, Martin St. Louis‘ children must have inherited the love for the sport from him. As reported by The Athletic, the talented ice hockey professional coached all of his three boys for the Mid Fairfield Rangers. Moreover, he seems to be a devoted dad who prioritizes his family and kids.

Furthermore, Mason played one season (2017-18) for Connecticut Jr. Rangers of the Brick Invitational league. He is currently playing for the Mid Fairfield Rangers 13U AAA. The youngest St. Louis is in his teenage years and still has a bright future ahead of him. Hopefully, he will accomplish great success in the future.

Is A Fan Of Steven Stamkos

For the 2017 Halloween, Martin St. Louis’ son, Mason dressed up as Steven Stamkos, ice hockey center and captain of the NHL team Tampa Bay Lightning. In the 2016-17 season, Steven was also among the leading NHL scorers, with 20 points in 17 games. Moreover, Mason’s dad shared photos of him donning Stamkos’ jersey on his Twitter account.

There are many costumes and plenty of NHL stars to pick from. He went with @RealStamkos91 !! Great choice. #hisfavplayer #rolemodel pic.twitter.com/BG4HwcVh4Z

Mason must be aspiring to be a great ice hockey player in the future. Well, having such a talented dad and brothers, he will get to learn all the techniques to play.

Nonetheless, Martin St. Louis’ son is living his life to the fullest. In addition, at such a young age, he has already developed some exemplary skills. So, will we see him being drafted in the NHL in the future? Well, only time will tell. Nevertheless, we wish Mason a bright future ahead.

Mason is a unique name of English origin that means a Tradesman or artisan who works in stone.