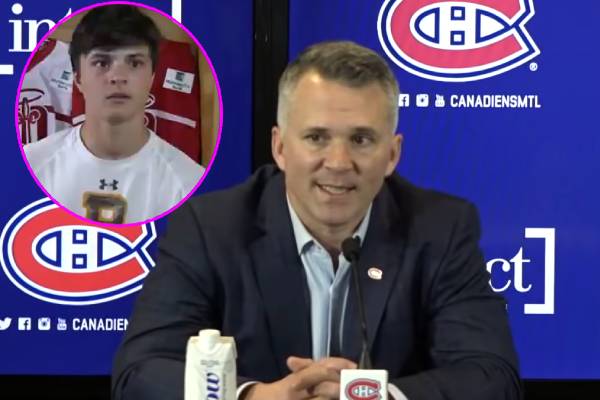 The current head coach of Montreal Canadiens, Martin St. Louis, is a former professional NHL ice hockey player. He competed for different teams from 1997 to 2015. Afterward, the Canadian sportsman started his coaching career in 2022 with the Canadiens.

During his two-decade-long career, the head coach has garnered immense fame and fortune. Thus, many of his fans are curious about his family members, including his wife and children. Well, all of the former player’s kids have followed in his footsteps. And, today we will be talking about Martin St. Louis’ son, Lucas St. Louis, in this article.

Lucas’ older brother goes to Northeastern University and is one of the talented ice hockey players on the college’s team. After demonstrating his skills at Brunswick High School, he is now focusing on his collegiate playing career.

Likewise, Lucas’ younger brother is also a passionate hockey player. He is currently playing for the Mid Fairfield Rangers 13U AAA team. Martin coached all of his kids for the Mid-Fairfield Rangers. Additionally, as the entire St. Louis family is into ice hockey, they must share a strong bond. Also, the coach and his wife must be proud of their boys.

Lucas has been passionate about ice hockey since childhood and started his playing career from earlier. He skated for six seasons for the Mid Fairfield Rangers from 2016 to 2021. In addition, he played for two seasons (2019-21) for Brunswick High School. Apart from that, Martin’s son attended USA Hockey Player Development Camp as a member of Select 16.

The talented young athlete skated on the 2021 US U-17 Men’s Select Team that placed 1st at the 2021 Five Nations Tournament in Visp, Switzerland. He played in three games and recorded two assists.

Lucas St. Louis is a name to watch for the future. Already set to represent the United States at the Five Nations Tournament, he’s more than capable at his position. (@mstlouis_26) pic.twitter.com/eUToMYc3Hd

As reported by New England Hockey Journal, Martin St. Louis’ son decided not to follow in his or Ryan’s footsteps when deciding which university hockey program he’d play in the coming days. Instead, the Connecticut native chose to commit to Harvard University in August 2021.

Furthermore, Lucas had quite a few options of his own but chose Ted Donato‘s program. The beloved son of the head coach is a mobile, offensive-minded, puck-moving defenseman. Hopefully, he will perform excellently at college and accomplish great success in the future.

Also, talking about Lucas St. Louis’ net worth, he is still young and has yet to begin his career. On the other hand, his dad’s fortune is worth $40 million.

Is He Dating Anyone?

As already mentioned, the Brunswick High alumnus seems quite focused on his playing career. During the last few years, he has demonstrated his skills and has become one of the promising ice hockey players. But, what about his relationship status, is he dating anyone?

Well, the young defenseman has remained silent regarding his romantic affairs. He is present on Instagram, but his account is in private mode. Thus, it has become challenging to learn about his love life. However, the younger St. Louis might be dating in secret and must be protecting his partner’s privacy. If not, anyone who becomes Lucas St. Louis’s girlfriend will be a lucky girl.

Nonetheless, Martin St. Louis’ son seems to be a hard-working and goal-oriented person. His family members must be proud of him and his accomplishments. We wish Lucas St. Louis a rocking career and a happy life ahead.

The name Lucas is from the Greek word Loukas, which means light. Thus, Lucas means Bringer of Light.