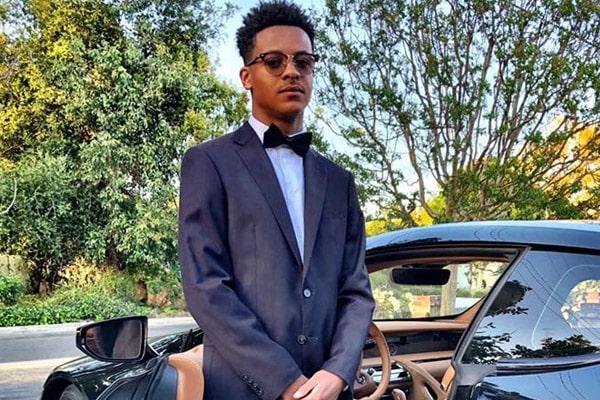 Blair Underwood is an American actor and a director better known as Jonathan Rollins in the legal drama series ‘L.A. Law.‘ Underwood is also famous for his role in various notorious movies, including Rules of Engagement Something New (2006), Madea’s Family Reunion (2006), and Juanita (2019) alongside Alfre Woodard. Moreover, Blair’s acting credit goes to his performance in various TV shows as well.

The Grammy Award winner Blair Underwood is a family man. On 31st May 2021, he parted ways with his wife Desiree DaCosta despite dating each other for almost 30 years. Furthermore, Blair is a proud father of three adorable children; two sons and a daughter

Here, in this article, meet one of the Blair Underwood’s son with his spouse Desiree, Blake Ellis Underwood.

Blake Is The Youngest Son Of Blair

As mentioned earlier, Blair Underwood is a father to three children with a long-time partner Desiree. After their wedding in 1994, the former couple welcomed their first son together, Paris Underwood, in 1997. Then, Desiree gave birth to Blair’s second son and the youngest one, Blake Ellis Underwood, in 2001.

Besides Paris, Blake has an older sister named Brielle Underwood. She was born in 1999, two years after Paris’ birth.

There are no details about the early childhood days of Blair Underwood’s son, Blake. However, from Blake’s Facebook, we know that he completed his school from Campbell Hall. Moreover, Blake is continuing his further study at Duke University, Durham, NC, United States.

Furthermore, there is no information regarding Blake’s profession and other similar facts. As he is just in his late teens, he might not be engaged in any job and focusing on his studies. Being the youngest son of wealthy and high-earning parents, he enjoys a bling life in Los Angeles with his mom, dad, and siblings.

His Brother Is An Emerging Musician

Like Blake, his elder brother, Paris, also completed his school from Campbell Hall School. Then, he joined the USC Marshall School of Business and graduated from there in 2019. After graduation, he is continuing his passion in the American music industry and doing some part-time jobs to hone his musical skills.

According to Paris’ social networking sites, he is a music producer with eight years of experience in Ableton Live. Blake’s brother also has a studio experience as a radio host for USC’s student-run radio station, KXSC. With all the experiences, he aims to be a famous musician in his near future.

The handsome and secretive, Blake’s parents, Blair and Desiree, were one of the examples of a long-lasting relationship in Hollywood. It had been over two decades since Blake’s mom and dad tied their marital knot.

But, sadly their marriage ended with a joint decision, which they announced in a statement. The ex-partners are looking forward to what lies ahead in their life and are on good terms.

The reason regarding their divorce is undisclosed but it happened on mutual terms.

The blessed mother and father of Blake are raising their young ones very well. Their priority is always their family. Blake and his whole family often go for outings and foreign tours during their vacation.

Like Blair, his little one, Blake is very concerned about his and his family’s privacy. He rarely shares pictures with his parents and siblings. Moreover, Blake does not update much about his daily life on his social media pages. So, it isn’t elementary to dig through most of the parts of Blake’s inner life.

The name Blake originated from Old English, which means pale blond one or dark.