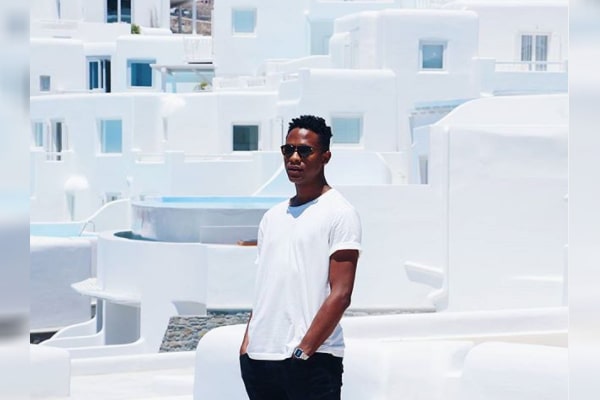 Blair Underwood is an American actor who debuted his career from the musical film, Krush Groove in 1985. Since then, he has appeared in several films, including Rules of Engagement, Something New, Jaunita, a leading role in the City of Angles, etc. Furthermore, Blair also received two Golden Globe nominations, one Grammy, five NAACP ImageAwards, and one Emmy.

Besides being a successful actor, Blair is also a doting father of three kids with his ex-wife Desiree DaCosta. For now, we will be talking about Blair Underwood’s eldest son, Paris Underwood.

Born in 1997 to an actor, Blair Underwood, and Desiree DaCosta, Paris Underwood has accomplished very much at the young age of 23.  The eldest of three was born a few years after Blair married his long time partner, DaCosta, on September 17, 1994.

There are no further details about Underwood’s son, Paris’ childhood, but he sure had a good connection with his parents. Mainly because Blair prioritizes his family and loves to spend quality time with them, he built a transparent relationship with his son.

Moreover, he is not the only child in the family. Aforementioned, Blair is a proud father of three, and Paris is the eldest of all. He has a younger sister named Brielle Underwood born in 1999 and a brother, Blake Ellis Underwood, born in 2001.

Furthermore, Blair Underwood’s son, Paris Underwood, went to Campbell Hall High School, where he studied business administration and management general. Similarly, he graduated from the University of Southern California in Business Management in 2019.

After graduation, Paris worked as an accounting assistant in Du-Par’s Restaurant for two months. Furthermore, Paris also served as a Merchandising intern in Five Four Club and production intern in Walton Isaacson for two and three months.

However, his interest was in music and hence diverted his career as an assistant to a music producer.

From Numbers To Rythm

City of Angels star, Blair Underwood’s son, Paris, took a massive turn of career choice. Although Paris studied BBA, he started establishing himself as a musician.

According to Paris Underwood’s LinkedIn, he worked as a radio host and assistant street team director in KXSC Radio for ten months. He boasts eight years of experience as a music producer in Ableton Live and skills accumulated from production for television.

Blair Underwood’s son seems to have a promising career as a music producer and will continue his work effortlessly. Let’s hope to hear more about Paris’ work in the future.

Well, Paris Underwood grew up to be a kind human being and is legible to make his own decisions. Among many choices he might have taken, making his relationship exclusive seems to be a wise one.

According to Paris Underwood’s Facebook, he updated his relationship status in February 2020. Furthermore, he often uploads pictures of his partner, Amy Baik. Well, it’s a beautiful combination of cultures.

The pair seems to be very much in love as Paris Underwood’s girlfriend often pops in his Insta feed. Let’s hope the couple makes it through several phases of a relationship and succeed together.

It was shocking when the news of Paris’ parent’s divorce was revealed on 31st May 2021. The long-time couple parted ways after spending almost 28 years together which only not blessed them with kids but also wonderful memories.

Blair and Desiree separated on mutual terms and announced their split via statement. The legal issues shall be revealed in the days to come. Moreover, the couples parting ways hasn’t been much of an issue as both the pair are looking to start a new journey in life.

Regardless of everything, Paris’ parents are always there for him and his siblings.

The name Paris is of Latin origin, which means pouch or purse.