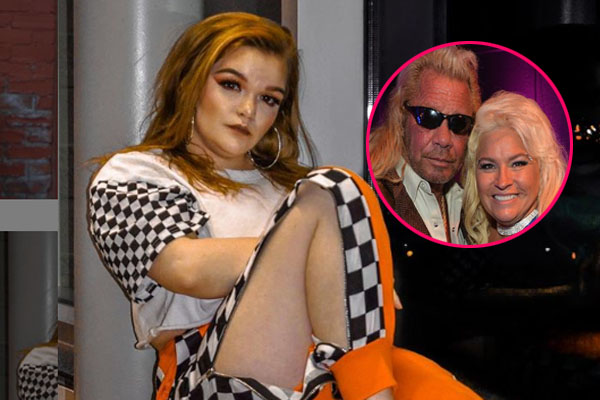 Bonnie Chapman is the third child between Duane Chapman and late Beth Smith aka Beth Chapman, who died on June 26, 2019 due to throat cancer. The gorgeous Bonnie Chapman was born on December 16, 1998, and is 20 years old at present. Beth Chapman’s daughter, Bonnie has two brothers Dominic Davis, Garry Chapman. She also has got a half-sister named Cecily Chapman. Bonnie’s father Duane was also married to La Fonda Sue Honeycutt.

Besides that, her father, Duane Chapman was married to four other women before tying the knot of relation with Beth Smith. Duane Chapman has had a total of 12 children from his ex-partners. So, Bonnie Chapman has many other half-siblings excluding her own siblings.

Bonnie Chapman is considerably habitual with the attention that she gets from paparazzi. She has a number of followers in both Instagram and Twitter. And not so long Bonnie posted a photo of herself on both social sites admitting that she is a pansexual.

Bonnie had hidden a big secret within herself for the past seven years. But as people became familiar with the term ‘pansexual’ she opened up and revealed her true identity without fear.

For the past seven years, I’ve kept kind of a big secret to myself.
I’m pansexual, now I’m sure the term is familiar with some people. It means to me I fall in love with personalities, rather than a gender. I haven’t told many people until now. I was so… https://t.co/p1uaA6H12M pic.twitter.com/PW68nsinCJ

From that, we can even tell that the gorgeous Bonnie Chapman is a courageous person. She mentioned herself as a loving person and she adores people regardless of their biological sex or gender identity.

Bonnie’s father, Duane Chapman has an estimated net worth of $6 million. With her father’s staggering earnings, Bonnie is surely living the life which other people are still hustling for that dream. Maybe she has a hobby to travel around the world as she has been to Japan and Las Vegas.

Going through Bonnie’s Instagram account, we have found that she loves wearing designer clothes and doing photo shoots. Similarly, Bonnie loves innocent creatures and has shown her love for animals by posting photos of animals such as dogs, cats, snakes, etc.

Bonnie is a word that was originated from Scotland. It refers as pretty or attractive.

eCelebrityMirror for latest News on Celebrity Babies and Entertainment.