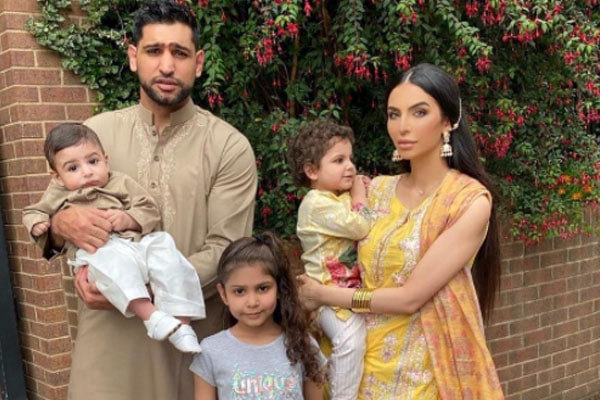 Amir Khan is a well-known professional boxer, philanthropist, and promoter. As a boxer, Khan has won numerous titles and accolades to date. He was a unified light-welterweight world champion who held the WBA as well as Super title from 2009 to 2012. Khan was also the winner of the IBF title in 2011. Two times World Professional boxing champion, Amir Khan, was named ESPN prospect of the year in 2007. Besides, Khan is also an owner of a charity organization named Amir Khan Foundation.

The co-owner of India’s Super Fight League (MMA) and Super Boxing League, Amir Khan, is a married man. He is married to Faryal Makhdoom and fathers three kids with her. Here, learn some interesting facts about all three of Amir Khan’s children, Lamaisah Khan, Alayna Khan, and Muhammad Zaviyar Khan. Also, know how they are spending their life as the kids of a celebrity dad.

The promoter and sponsor of Khan’s promotions, Amir Khan, married Faryal Makhdoom on 31 May 2013 in New York City. The couple celebrated their marriage again after they flew back to Bolton in the presence of 4K guests. Amir Khan and his beautiful wife, Faryal welcomed their first child, daughter Lamaisah Khan on 23 May 2014 at 4:05 am.

The proud father, Amir Khan, had announced the birth of his little girl, Lamaisah, via his Twitter page. Amir tweeted that he and his wife were delighted to announce the birth of their first child Lamysa Khan. Khan declared through the same post that everyone was doing very well and thanked everyone for their good wishes. A few hours later, the overwhelmed dad also shared a photo of himself with new-born Lamysa and captioned it with her name and her arrival date. Lamaisah’s grandparents also joined her and her parents at the hospital she was born.

Originally, Amir Khan’s close friends and family members spelled his daughter, Lamaisah’s name, in two different ways, Lamysa and Lamysah. The married pair, Amir and Faryal, tweeted that their family and friends struggled to pronounce the name. So, they settled on Lamaisah.

Amir Khan’s six-year-old daughter, Lamaisah Khan, loves posing with her parents on several occasions. Seeing the pictures posted by her dad and mom on their social media pages, people often say that she looks just like her dad.

Four years after the birth of Lamaisah, Amir and Faryal announced their separation via a tweet in August 2017. Amir accused Faryal of cheating with another boxer Anthony Joshua which both parties strongly denied. Also, there were rumors of Faryal having disagreements with her in-laws, Falah Khan and Shah Khan. But, a few months later, the pair reconciled, and in November of the same year, Amir Khan’s wife, Faryal, notified the public that she was three months pregnant with their second kid. They welcomed their second child, daughter Alayna Khan on 24 April 2018, weighing 8lbs 3oz.

The happy dad, Amir Khan, declared the arrival of his second daughter, Alayna, through a post on his Twitter. He revealed the name and weight of Alayna alongside a photo with her. Moreover, Amir even added another photo of Alayna a few hours after her birth on his gram.

Like her elder sister, Lamaisah, Alayna also enjoys posing with her parents. She loves playing with her big sister and doing various kids activities with her younger brother, Muhammad.

Unlike many other celebrity parents, Amir Khan and his wife, Faryal Makhdoom, do not seem to be secretive regarding their kid’s appearance on social media handles. They gave birth to their third child, a son, Muhammad Zaviyar Khan on 22 February 2020, weighing 7lbs 12oz. Like the previous two kids, Amir Khan announced the arrival of his baby boy on social media. The proud momma for the third time, Fariyal also shared cute snaps of Muhammad dressed in blue on her Instagram story.

The parents of three, Amir and Faryal, had revealed they were expecting a son in a sweet gender reveal video on Instagram in August 2020. In the video, Amir Khan’s wife, Faryal, said to her guests that they were having their third child and they were excited and nervous at the same time. She asked everyone present in the baby shower ceremony what baby khan will be. Amir used a giant boxing globe to wallop a huge balloon that exploded and showered him and his wife with blue confetti, which revealed that it was a boy.

Amir Khan’s son, Muhammad Zaviyar Khan, loves to play with his big sisters. He can often be spotted in pictures with his parents and sisters. Furthermore, all three of Amir Khan’s children, Lamaisah, Alayna, and Muhammad, are enjoying their childhood to their best. Despite having busy schedules, their parents, Amir and Faryal, separate enough time to spend quality time with them. They do their best to show their little ones how much they adore and care for them.

Lamaisah is an Arabic origin name that means soft to touch.

The name Muhammad is also of Arabic origin, which means praised or thanked. Similarly, the middle name Zaviyar means Loin’s Heart or Brave.