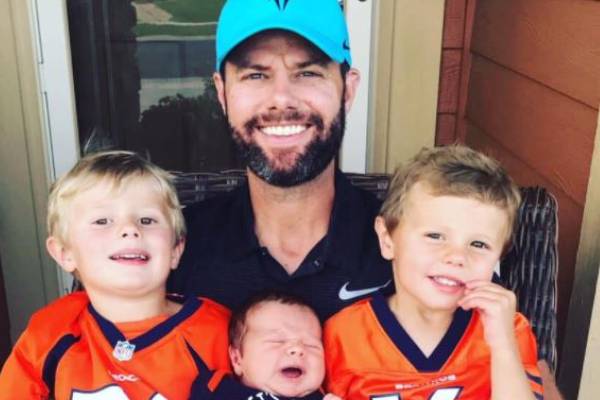 Besides coaching in the NFL, Brandon is a loving husband and father to his three kids. He has been married to Amy Staley for more than a decade. The couple dated for a long time before their marriage. Amy discussed growing up around the football world while dating Brandon. His whole family is football fanatics, and their world revolved around the sport.

Brandon has welcomed three children with Amy. So, today, we will look into Brandon Staley’s sons and see how they are growing up.

Brandon Is A Father Of Three Sons

Brandon and his wife, Amy, have three children together. Colin Staley is their eldest son, followed by Will Staley and the youngest is Grant Staley. The couple has managed to keep their children’s personal life reserved and away from the media. Nevertheless, no further records or birth details have emerged regarding the Staley kids.

However, in an episode of playmakers with the Los Angeles Chargers, Amy mentioned the kids are very interested and invested in football. Fascinatingly, all of her sons said ball before they even uttered “mama”.

Brandon Staley’s children are always talking about football and want to know everything that happens. They ask numerous questions regarding football and their dad’s team. Moreover the boys love to collect football cards and associate themselves with the sport whenever possible.

Interestingly, Amy shared a story where Colin, in his 1st year at pre-school in Chicago, could recall numbers until 99. The teachers were super shocked seeing this and thought it was not normal. Seemingly, the little one remembered the numbers since football players have them on their jerseys.

Reading about these interesting tidbits shows how interested Brandon Staley’s sons are in his life and career.

Brandon Staley’s Children Must Be Living A Luxurious Life

As the head coach of the Los Angeles Chargers, Brandon must have a significant net worth and earn a handsome amount. NBC Sports reported his salary to be unknown, but several sources claim that he has an annual salary of somewhere from $1 million to above. In addition, Brandon must take care of his kids with this kind of substantial earning, properly fulfilling their needs and demands.

The kids also must be loving their life as the sons of Brandon Staley. They seem very drawn into football and can be seen in the chargers’ headquarter and games with their mother, Amy Staley. At a very young age, they get access to special and VIP areas thanks to their dad being the head coach of the chargers.

Undoubtedly, Brandon’s sound net worth has allowed the little ones to grow up in comfort and will in the future as well.

It will come as no surprise if one or all of Brandon’s kids decides to follow in his footsteps and pursue a career in the NFL. As mentioned earlier, Brandon’s children are crazy football fans, having grown up around the game. Moreover, Amy, described them as mini Brandons, since all of them are very curious about the game. From draft nights to players’ college details, the kids focus on every tiny detail.

Aforementioned, Brandon Staley’s children uttered the word “ball” before any other words. This incident itself shows the importance of football and its essence within the family. We wish all the best to Brandon Staley and his kids and hope to see them all in the NFL at some stage in their life.

Brandon’s eldest son Colin’s name means people of victory. It is a short form of Nicholas that originated from Scottish and Greek origin.

Similarly, Will means protector, and the word is of English origin.

Last but not least, Grant means great or tall, and it is also of English origin.