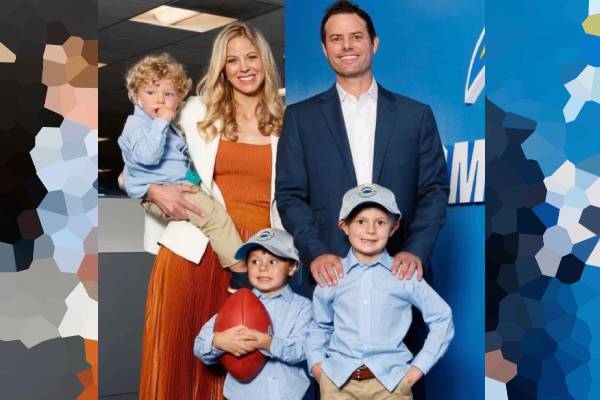 Amy Staley and her husband Brandon Staley have been married for over a decade. Image Source: Amy's Facebook.

The Los Angeles Chargers are a popular franchise in the NFL. Brandon Staley is the present head coach of the Chargers in the National Football League (NFL). The graceful 39-year-old is regarded as one of the best defensive minds in the NFL. He was appointed the head coach by the Chargers on 17th January 2021 following his successful spell as defensive coordinator for Los Angeles Rams.

Apart from the world of football, Brandon is very close to his family. He was raised by his parents, Bruce Staley and Linda Staley, in Perry, Ohio. Brandon is also a loving husband and father. He has been married to Amy Staley for over a decade now and has welcomed three children with her.

Hence, in this article today, we will be talking about Brandon Staley’s wife, Amy Staley, her early life, and what she is doing currently.

Brandon Staley’s spouse Amy Staley, aka Amanda Kristin Ward, was born on 31st October 1985. She was born in Sycamore, Illinois, to her parents, John Ward and Deborah Ward. Amy completed her schooling at Sycamore High School. Furthemore, she earned her bachelor’s degree in elementary education from Northern Illinois University.

Growing up as a kid, Amy was always attached to sports on different levels. During a podcast, she mentioned that sport was an integral part of her life and had a huge impact. Her mother was a P.E. teacher in her town and Amy herself played volleyball during her school days. Brandon Staley’s wife even gained a scholarship program thanks to her volleyball skills in college.

During the interview, Amy also expressed that her parents had invested a lot of time and money in her volleyball career. As a result, Amy always tried to repay her parents by giving everything she had in sports as a child.

Has Three Children With Brandon Staley

Amy and Brandon Staley got married on 25th June 2011 at St. Cyprian Church back in Brandon’s hometown Perry, Ohio. The couple has been in bliss since their marriage. They met at a very young age and bonded on their love for sports. The love birds have welcomed three adorable sons, Colin Staley, Will Staley, and Grant Staley, during their marital span.

The kids share a very joyful and loving bond with their parents. Going through Amy’s Facebook profile, one can see that the family is enjoying their life living near the beaches of Los Angeles. Furthermore, Amy Staley’s children were also present during Brandon’s appointment day.

The couple currently lives in Thousand Oaks, California, together with their three sons.

After completing her bachelor’s level, Amy enrolled in John Carroll University to pursue a master’s in business. Her husband, Brandon, worked as the defensive coordinator in the university for three years. However, she changed her major from business to reading instructions within just three weeks. She thought business was not her cup of tea. Instead, Amy was passionate about working with the kids.

Seemingly, her love for kids drew her to teaching. She studied child psychology, and after taking some educational courses, she knew this was what she wanted to be doing and got into teaching.

Amy started her teaching career as a first-grade teacher to kids in Hutchinson, Kansas. Since then, she has taught in seven schools in six districts and five states. Amy mentioned that she still remembers every face she taught during her tenure as a teacher. Her experience as a teacher was very pleasant, and she misses it sometimes.

Amy might have given up her job to give more time to her family and raise her sons. We wish Brandon Staley’s wife all the best for her future and hope to see her little ones in the NFL someday.