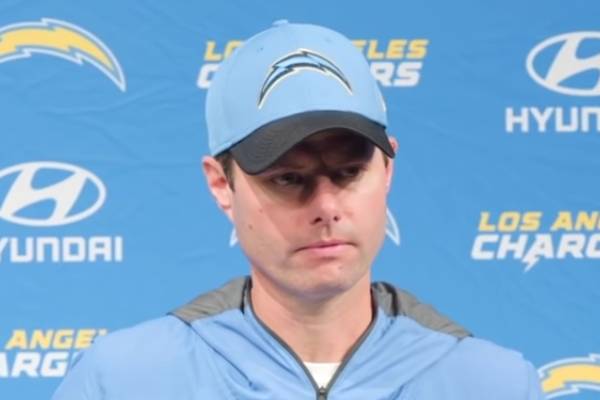 If you watch the NFL, you might have definitely heard the name Brandon Staley. He is the current head coach of the Los Angeles Chargers in the National Football League (NFL). The 39-year-old talented coach is considered one of the best defensive minds in today’s game.

Brandon started coaching in the NFL with Chicago Bears back in 2017. He was hired as their outside linebackers coach. Following his stint with the Bears, Brandon was approached by Denver Broncos, offering him a job similar to what he was doing at Chicago. He accepted this offer and reunited with his former head coach Vic Fangio.

On 17th January 2021, Staley was hired as the head coach for the first time in his career by Los Angeles Chargers. The club revealed this decision on their official website. He still currently works as their head coach. Similarly, in his short span of just five years in the NFL as a coach, Brandon might have earned a reasonable sum adding it to his fortune. Hence, today we will be looking into Brandon Staley’s net worth, salary, and lifestyle.

Brandon Staley Net Worth And Earnings

Before starting out as a coach in the NFL, Brandon used to play college football for the University of Dayton. He started for two years at the quarterback position for his team Flyers from 2003-2004. He finished his playing career with Mercyhurst College in 2005.

Unfortunately, Brandon was diagnosed with Hodgkin lymphoma at 24 years old, cutting his playing time short. However, he might have earned some money during his college career.

Also Read: Know About Mike McCarthy’s Earnings And Net Worth

Earnings Prior To Being Head Coach

Similarly, while working as the linebackers coach for Chicago Bears and Denver Broncos, he might have bagged a substantial amount of money. Web results show that an average salary of a linebacker coach can range from $100,000 to $500,000. The salary range varies depending upon the coach’s achievements and experience.

Linebacker coach is not the only position Brandon has worked before being appointed the head coach. He worked for Los Angeles Rams as their defensive coordinator. Defensive coordinators’ salaries are more than positional coaches. They can earn up to $1 million, and Brandon is one of the most praised and talked about defensive minds in the game. He might have earned the maximum during his tenure with the Rams.

Earnings As The Head Coach

While working as the defensive coordinator of the Los Angeles Rams, he guided their defense to 1st in points and total yards allowed. Following his impressive stint with the Rams, Los Angeles Chargers appointed him as their head coach.

However, Brandon Staley’s net worth and salary details are debatable in the sports world. Some reports suggest that he earns around $1 million per year from his current contract. His reported salary of $1 million would be one of the lowest salaries for an NFL coach.

But in an article posted by NBC Sports revealing the salaries of NFL coaches, they revealed Brandon’s salary and contract amount to be unknown. Well, Bill Belichick is the highest-paid NFL coach with a whopping annual salary of $12.5 million.

Working inside the NFL as a coach is obviously a privileged job. Likewise, Brandon has also hopefully managed to live a luxurious and lavish lifestyle earning a good fortune. We can assume that he lives in a comfortable home with his family. He might also own some expensive assets. Altogether, it is safe to say that Brandon Staley’s fortune sits quite comfortably in a safe spot.

Nevertheless, he is still regarded as one of the most talented young coaches in the NFL. Followingly, it seems like he is going to be in the NFL at the highest level for a long time earning himself a significant sum of money. Coaching at the highest level in the NFL will certainly leave a positive impact on Brandon Staley’s net worth. We wish him all the luck.