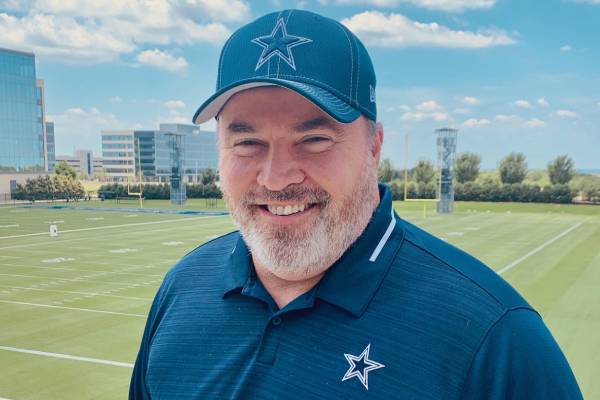 Mike McCarthy's net worth has allowed him to live a comfortable lifestyle. Image Source: Wikimedia Commons.

Michael John McCarthy, best known as Mike McCarthy, is a popular name in the sports industry, especially in the NFL world. He is the head coach of the National Football League team Dallas Cowboys. Before that, he served as the head coach of the Green Bay Packers for 12 years. He is also regarded to be one of the coaches who led one team to eight playoff appearances. He has gained immense fame and prominence because of his successful professional career.

Besides fame, the NFL fans and followers are curious to know how much has the coach earned to his name. His riches and income sources have become a topic of interest for many of them. So, why not learn about Mike McCarthy’s net worth and earning details.

Mike McCarthy Net Worth And Earnings

As mentioned earlier, the Dallas Cowboys head coach has undoubtedly gained huge prominence globally. Apart from that, he must have also earned an enormous sum of wealth. According to Celebrity Net Worth, Mike McCarthy’s net worth is estimated to be $9 million. Thus, the coach seems to have earned multi-million dollars worth of fortune to his name.

Now the question arises, how did the NFL coach amass such an enormous amount. What are his earning or income sources? Thus, let’s find out further about Mike McCarthy’s earning details in the following paragraphs.

Mike McCarthy had a brief playing career as he played for only two years. In 1984, he went to Scottsdale Community College. There, he played one season for the Fighting Artichokes football team. Then, he transferred to Baker University, where he was a two-time-all-conference tight end. Similarly, in 1986, he served as the team’s captain. The team finished that season by becoming the national runner-up in NAIA Division II.

After graduating in 1987, Mike was hired by Duane Dirk, the defensive coordinator at Fort Hays State University, as a defensive graduate assistant. He even worked in a volunteer coach position under Mike Gottfried, the head coach at the University of Pittsburgh. Similarly, he also worked under coach Paul Hackett.

In 1993, the Kansas City Chiefs hired Mike to work under Marty Schottenheimer. There he worked as an offensive quality control assistant for two years. He also has experience working as a quarterback coach for the Chiefs. Moreover, Mike also worked with Green Bay Packers as the quarterback coach.

McCarthy also worked as offensive coordinator for the New Orleans Saints and San Francisco 49ers from 2000 to 2004 and 2006, respectively. It has been reported that an NFL assistant coach earned $150,000 – $175,000 per year in 2017. Therefore, Mike’s earnings must have been around the same range. As a result, Mike McCarthy’s net worth increased over the years that he worked as an assistant coach for different teams.

Also Read: What Are Roger Goodell’s Net Worth And Earnings?

While working with the Packers, Mike helped them win different matches and claim various titles. Furthermore, during his tenure as the head coach, the Green Bay Packers even won the Super Bowl in the 2010 season. Then in 2011, he signed a multi-year contract extension worth $15 million. His salary increased to $5,000,000 per year.

As per ESPN India, in November 2014, Mike inked a deal that ran through 2018. McCarthy then signed a one-year contract extension, but in December 2018, the Packers released him, which marked the end of his tenure with the team. Thus, McCarthy seems to have earned considerably.

Throughout the 2019 season, Mike interviewed with different teams, including the Cleveland Browns, the New York Jets, and eventually with the Dallas Cowboys. In January 2020, the Cowboys hired him as their coach after a 12-hour long interview and he signed a five-year deal.

However, the contract details of the coach have not been revealed yet. But looking at his experience, he must be earning a considerable sum from the Cowboys.

Furthermore, Mike became the 18th highest-paid coach in 2021, with earnings of $4 million that season. As he is still very active in his profession, the Cowboys coach will earn more in the coming days. Thus, Mike McCarthy’s net worth will likely increase in the future.

As mentioned earlier, Mike McCarthy’s fortune is estimated to be $9 million. With a multi-million dollar’s worth of riches to his name, he must be living a comfortable life with his family. Unfortunately, the 58-year-old coach does not have any active social media, so very little is known about his lifestyle outside the football arena. As per Virtual Globetrotting, he has homes in Green Bay, Wisconsin, and De Pere, Wisconsin.

Apart from that, it is not known if Mike has any real estate investments. Nevertheless, let’s hope Mike McCarthy’s fortune increases significantly over the years so that he continues to live a comfortable lifestyle.