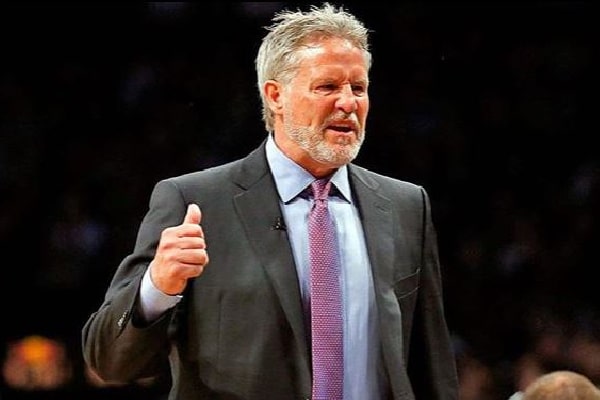 Brett Brown has become successful in the upbringing of his 3 children. Image source: social media .

If you are here, you must know about Brett Brown. Brett served as the head coach of the Philadelphia 76ers from August 2013 till August 2020. This coach brought the best of many players but couldn’t prove himself as one of the best coaches in the National Basketball Association.

We can find a lot about his career on the internet, but very less is known about his personal life. So, this article is for the ones who are yearning to know about his family- especially his children.

Brett Brown Is A Father of 3 Children

Brett Brown is married to Anna Brown since 1987. The happily married longtime couple has three children together- two daughters and one son. They also like to keep their profiles low, and not much is out there about them, but we are sure you will receive a substantial amount of information about them.

Please stick to the end of this article to know interesting facts about Brett Brown’s children.

Julia Brown is the eldest daughter of Brett Brown. Brett and Anna welcomed Julia into this world in 1995. She was, apparently, born in Melbourne, Australia.

Also Read: Mike Budenholzer Is A Father Of Four, Meet All Of Them

The 25 years old has a developmental disorder, but that hasn’t stopped her from being an independent person and a dutiful daughter. Despite the disorder, she works at the GET Cafe in Narbeth. Helping to make coffee, working in the cash register, and washing dishes are some of the duties that she performs at her job. GET is a special cafe with the mission of giving paid jobs to differently-abled people.

Brett wisecracked that Julie is the primary breadwinner of the house. If you are wondering why, Brett lost his job in August 2020, and it is most probable that his wife, Anna, doesn’t have a job either. Brett is very proud of his daughter, Julia.

The couple gave birth to their second child, Laura Brown, in 1998 in Melbourne, Australia. She spent most of her childhood in Australia and moved to San Antonio, America.

The 22 years old is a Junior at Georgetown University. Like the rest of the Brett family, Laura also likes to keep her life under the radar. So she is not engaged in any social media platforms. We don’t have much information about her, but one of her college mates said she is pretty cheerful and easygoing. She doesn’t like to talk about her father’s career. Maybe she wants to keep her profile low, or she wants to ignore the talk about her father’s career going downhill.

After being blessed with two beautiful and dutiful daughters, Brett and Anna decided to welcome one new addition to the family. The couple gave birth to Sam Brown in 2005. Unlike his sisters, he was born in America.

The most junior member of this family has already started to follow the footsteps of his father. He plays for the basketball team of the Lower Merion High School, and his skills are incredible. The 15 years old certainly shares the spirit of his father, but his gameplay style is understandably different from his father’s. Coach Brett Brown’s son Sam also loves to play the piano and has an unquenchable thirst for good books.

Although Brett failed as a coach of the Philadelphia 76ers., he definitely succeeded in becoming a wonderful father. All three children are best in their own ways. Brett is a proud father of 3 children; no questions on that.

We hope that the children grow up to be good, humble, and successful adults.