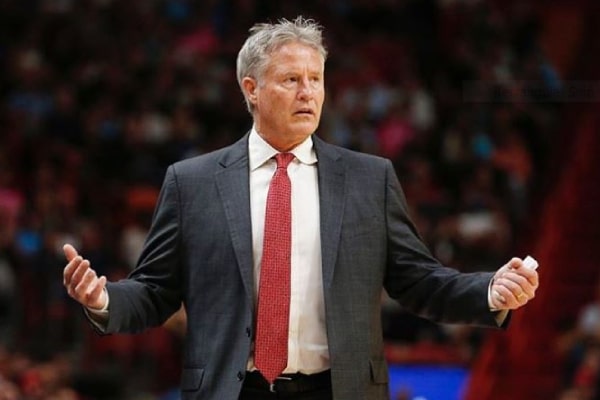 National Basketball Association is full of obsessive coaches, and one of them is Brett Brown. Brown was the head coach of the Philadelphia 76ers from 2013 to August 2020. As a coach, he has brought the talent of a number of players into the light. He had been a dedicated coach not only in the U.S but also in Australia.

Apart from being a good coach, he is also a husband and a father of three children. The 59-years-old coach has been married to Anna Brown for a long time, and the couple seems to be inseparable. This family likes to keep a low profile, still, we have accumulated some interesting and much unknown facts about the love life of Anna Brown and Brett Brown.

Facts About The Love-life Of Anna Brown And Brett Brown

Anna is the most significant person in Bretts’s life. They are an incredible duo who have been able to manage the work-life career along with three children. We can say that love and support of Anna are what kept him going since the last 3 decades or so.

Since we already know Anna Brown as the wife of Brett Brown, let’s see how they met and who Anna is on her own.

Who Is Brett Brown’s Wife Anna?

Anna Brown (Anna Robertson) was an ordinary girl born in September 1967 in Melbourne, Australia. This ordinary girl(then) is now an extraordinary wife to Brett.

Anna was a cattle farmer’s daughter and lived in a small farming town located between Adelaide and Melbourne. She lived a normal life and often lent a hand, in farming, to her father. On one fine day, she met Brett, and their life changed forever.

After graduating from Boston University, Brett landed a six-figure job at AT&T. Soon after 2.5 years, he quit his job and backpacked across Fiji, Tahiti, New Zealand, and Australia- in search of happiness and something he was passionate about. In Australia, he lived with his friend Stacy Atterton and her husband.

During his temporary stay in Australia, while camping on the Great barrier Reef, he met Anna in Melbourne in 1987. Brett couldn’t leave her behind, so he placed a call to Lindsay Gaze, the then coach of the Melbourne Tigers pro basketball club of Australia’s National Basketball League, to inquire about an assistant coaching job. Luckily, Brett got the job and soon realized that he wanted to spend his whole life with Anna.

The Wedding And Children

Though the exact marriage date has not been unveiled yet, they are now married for nearly 3 decades. So the sacred ceremony took place at some time between January 1987 to December 1987. Anna was 19, and Brett was 26 at the time. Soon after that, they gave birth to two daughters, Julia Brown and Laura Brown.

After a few years of marriage, they moved to San Antonio, America. Brett was able to discover his passion. He found out that he wanted to coach a basketball team, and luckily his father, Bob Brown, was a high school and college basketball coach. Brett could certainly use his mentorship and guidance. Then, the couple also gave birth to their youngest son Sam Brown, who is also a basketball enthusiast.

How Are They Doing Now?

Brett’s stay in Australia has highly influenced his life and ethics. The couple has been embracing the power of hard work and ethics. Yet Brett’s career has been full of ups and downs. Anna has always been a good life partner to Brett. She was always alongside Brett, whether it be his highs or his lows. The love life of Anna and Brett has been thriving ever since their wedding. Their eternal love has set an example for young lovers who are unsure due to their careers.