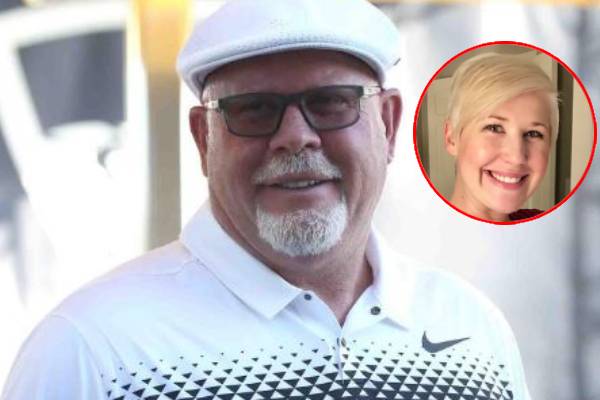 Bruce Arians have made himself known to the world due to his involvement in the NFL world. Arians currently works as the head coach of the National Football League team, Tampa Bay Buccaneers, and has spent over four decades in the field. He has not only amassed multi-million dollars’ worth of fortune to his name but has accumulated a number of awards and accolades.

The NFL coach is a family man who loves to enjoy quality time with his family. Arians have been married to his high school sweetheart Christine Arians. They welcomed a son and a daughter in their many years of togetherness. In this article, let’s find out about Bruce Arians’ daughter Kristi Arians and see how she has grown up.

As mentioned earlier, Bruce Arians have been happily married to Christine Arians, his high school sweetheart. Kristi’s parents met at high school and got married on June 12, 1971.

Nine years after their marriage, Kristi Anne Arians was born on December 15, 1980. She has an elder brother, Jake Arians, born Jacob Bruce Arians, whom her parents had welcomed on January 16, 1978.

Kristi has a good relationship with her elder brother and parents. As the youngest one in the family, Bruce Arians’ little girl must have been pampered while growing up.

The NFL coach’s children have all grown up and are doing great in their respective fields of profession. Kristi Arians’ brother followed in their dad’s footsteps and is a former American football placekicker. Kristi, however, has chosen a different field as her interest.

Bruce Arians’ baby girl enrolled at the University of Alabama for her graduate degrees. However, it has not been revealed where she received her high school and undergraduate degree. In 2004, she graduated with a Master of Science in Interior Design. She even made it to the National Dean’s List and was IDEC Graduate Student Member.

Apart from that, Bruce’s baby girl is the co-owner of an interior design firm. She and Terra Bonner co-founded Catori Design House in April 2018. It is a full-service design firm that provides space planning, programming, interior architecture, design, furniture selection, and procurement.

Kristi seems to be doing great in her work, and her designing firm also seems to have helped her earn significantly. She moves forward with a goal to offer solutions that exceed her client’s vision or expectations.

Let’s hope her interior firm continues to grow and Kristi finds even more success in the days to come.

Also Read: Know About The Son Of The Ex-Pair Jonathan Togo And Diora Baird

Shares Two Kids With Her Husband

As stated above, Bruce Arians’ daughter is all grown up now and is involved in a great profession. Talking about her personal life, she shares a blissful marital life with Blake Freeman. The couple got married the knot in May 2015. Apart from being an amazing wife, Kristi is the doting mother of two children, whom she welcomed with her husband.

In July 2017, Kristi gave birth to their eldest son Aiden Asher Freeman. Then in 2019, she and her husband welcomed their second son, Mills Freeman. They all are living a wonderful life together, and Kristi often shares an adorable picture of her family on her Facebook.

Bruce Arians’ daughter seems to be doing great professionally and in her personal life. Nevertheless, let’s hope Kristi has a wonderful time and a successful career ahead.

The name Kristi is an English name that means Diminutive Form of Names Beginning With Krist. Furthermore, the name Anne has a Hebrew origin which means Gracious, Merciful.