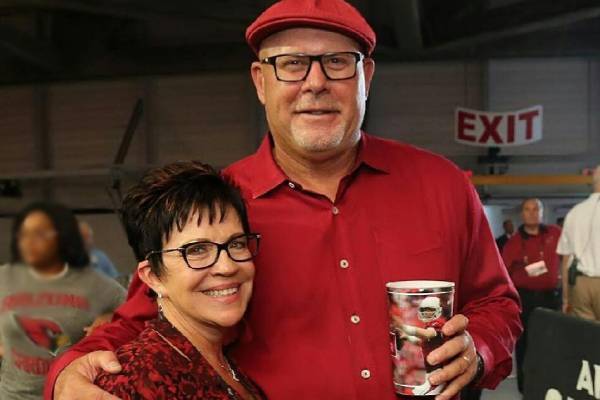 Bruce Charles Arians, also known as Bruce Arians, is the head coach of the NFL team Tampa Bay Buccaneers. Prior to that, he had coached several other NFL teams and colleges, making it over four decades in the football world as a coach. He has led many teams to win a number of matches and titles and has also bagged a few for himself. Thus, he has gained immense fame and prominence worldwide.

Talking about his personal life, Bruce has been married for a long time to Christine Arians. Together, they have welcomed a son and a daughter whom they raised with great love and care. Today, in this article, let’s learn in detail about Bruce Arians’ wife and their long-lasting marriage.

As mentioned earlier, Buccaneers head coach Bruce Arians share a blissful marital life with his high school sweetheart Christine Arians. The love birds have known each other since they were 14. They were in the same homeroom and same grade.

However, Bruce was shy and he never joined the conversation between Christine and his friend Mike. Moreover, he only spoke to her when they were sophomores by offering to help Christine in French class.

The pair shared their first kiss in sophomore year, after a football game in an alley behind one of their friend’s houses. Bruce was a three-sport star in high school, and Christine was a cheerleader. Furthermore, the lovely couple even went to Virginia Tech together. On June 12, 1971, the duo tied the knot, and since then have been living a wonderful life together.

In almost five decades of togetherness, Bruce Arians’ wife gave birth to their two children. On January 26, 1978, she and her husband welcomed their son, Jacob Bruce Arians, aka Jake Arians. Two years later, on December 15, 1980, their daughter, Kristi Anne Arians, arrived, who completed the Arians family.

Christine and Bruce have been living a wonderful life with the kids and grandkids. She has also been involved in a number of charities with her husband and children.

While Bruce Arians is shining on the football field, his wife, Christine, is doing well away from the field. As mentioned earlier, the couple attended the same university. At Virginia Tech, Bruce Arians’ wife, Christine, pursued her undergraduate degree in Biology. She graduated in 1976. At that time, her husband played quarterback for the university’s football team and even became the assistant coach of the team.

In 1986, Christine enrolled in Temple University, where her husband was head coach. According to Tampa Bay Times, she took and passed the bar exam and has practiced law in five different states as her husband’s coaching life took hold.

Then, Christine worked as a family law attorney for 15 years. She revealed that she likes to refer to herself as a “broken family” attorney because intact families don’t end up in court. After working as an attorney for all those years, she worked in other sectors.

Also Read: Learn Some Ideas That Will Be Useful For Your Interior Design

Christine Is The Director With Their Family’s Foundation

After working as a family law attorney for 15 years, Bruce Arians’ wife Christine began volunteering for Court Appointed Special Advocate (CASA). She spent the next 12 years volunteering for three different CASA programs. Then, she moved to Arizona and co-founded the Arians Family Foundation (AFF) with her husband.

Currently, Christine serves as a director of the Foundation, which supports several CASA programs. Those programs even include several others in which she worked or volunteered. Their mission is to raise money and provide love and help for the kids that are involved in the court system due to abuse or neglect by their families.

Moreover, Christine and her husband host one of the most star-studded fundraisers every spring in sports and bring out the popular names around. Because of her work for abused and neglected kids, she became known as a Guardian Ad Litem, the name for a court-appointed special advocate for at-risk kids.

Christine has helped many kids over the years. Apart from the welfare for kids, Bruce’s spouse has also ventured into the business world. She and grief specialist Barbara Saint John launched a Scottsdale business, The Zone. It seeks to assist those with career pressures, anxieties, depressed individuals, and kids with behavioral issues.

The business offers a specially designed relaxation chamber or booth whose starting price is $299 for a session of three hours long sessions. The sales profits will be donated to the foundation for charitable purposes.

Christine seems to be doing great in her business and charities. Nevertheless, let’s hope she gets successful in her work in the coming days.

Is Supportive Of Her Husband’s Career

The NFL coach, Bruce Arians, is lucky to have a supportive wife like Christine in his life. She supports and advises him in every decision that he takes. She encouraged her husband to hire female coaches. Moreover, in January 2018, her husband even retired as coach of the Arizona Cardinals, attributing it to her and his own health issues.

Interestingly, during any NFL matches, Bruce Arians’ wife avoids other coaches’ wives, which shows her competitive spirit. Bruce and Christine have been each other’s greatest support since the day they got together. They are living a blissful life together. Let’s hope Christine has a wonderful life ahead.