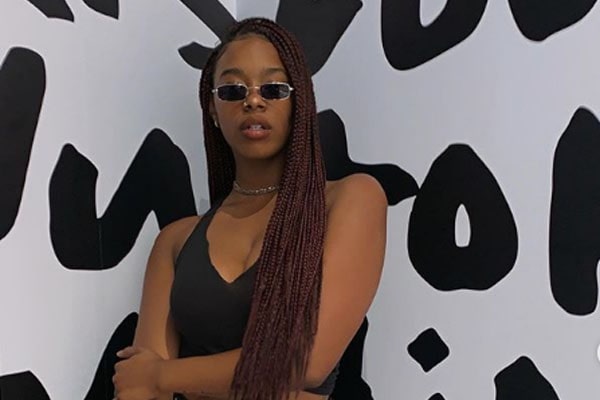 Born in May 1999, Cacie Smith is Busta Rhymes‘ daughter with his baby mama, Rhonda Randall. She is very fortunate to have such loving and caring parents. Cacie’s dad, Busta Rhymes is a famous rapper, musician, singer, record producer, actor. As for her mom, she is not a familiar face in the media and limelight.

Cacie Smith has got many half-siblings from her dad’s side. They are T’ziah Wood-Smith, T’Khi Wood-Smith, Trillian Wood-Smith, Mariah Elizabeth Miskelly, and Miracle. On the other hand, she has a half-brother and half-sister from her mom’s side, and her half-sister is Cailin Reid. Now, coming back to Cacie,  let’s know more about Busta Rhymes’ daughter.

Cacie Smith Is Close To Her Family Members

Gorgeous Cacie Smith is close with all of her family members. She loves her parents and half-siblings from the bottom of her heart. Busta Rhymes’ daughter also loves spending time with him. She probably visits them pretty often to have the same bonding of father-daughter as well as mother-daughter.

If you didn’t know, Busta Rhymes’ daughter graduated from high school in June 2017 with her half-sister, Mariah. Cacie’s dad and half-brother, T’ziah were present there to celebrate their graduation day with them. It shows Busta Rhymes loves his daughter and is always there for her. Similarly, T’ziah and Mariah’s bonding with Cacie is probably wonderful. We assume she gets along with T’Khi, Trillian, and Miracle as well.

Likewise, Cacie’s bond with her mom is very good. The mother-daughter duo loves to hang out with each other too. She has also posted photos of her with her mom wishing on her birthday on her Instagram Profile. She also celebrated Christmas with her mom, Rhonda, and her half-siblings from her momma’s side in 2019. Cacie’s mom and her two daughters are like best buddies.

We can see that Cacie cares for her family members so much. So, Cacie might be the glue that holds her family.

Busta Rhymes’ Daughter Was A Basketball Player In High School

Also, she loves taking selfies most of the time. It’s hard to say this but even if she is so gorgeous and pretty, she is probably single at the moment. Cacie said that she gets attracted to someone who has an amazing personality and is very caring.

Since Cacie is living a life that is totally different as compared to her dad’s, she apparently has a low-key lifestyle. Nevertheless, both of Cacie’s parents are proud of her. She is very happy with her subtle life and is probably loving how it has been going.

According to the Greek origin, the meaning of Cacie is ‘thorny tree; alert, watchful.’