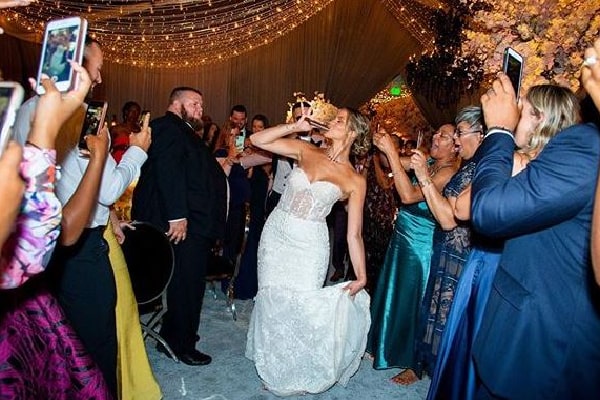 If you are someone who follows the National Basketball Association (NBA), you must be familiar with the last name Rivers; Doc Rivers, the head coach of Philadelphia 76ers; Austin Rivers, point guard of Houston Rockets; Jeremiah Rivers, point guard of Maine Red Claws. In this article, we are going to talk about one another member of the Rivers family– Callie Rivers.

Callie Rivers is the second child among the four children of Doc Rivers and Kristen Rivers.  Professionally, she is a retired volleyball player and is also tied to the Curry family.

We have 7 interesting facts about Doc Rivers’ daughter and Seth Curry‘s wife, so stick to the end of this article to know about the former athlete and the lesser-known Rivers.

Callie Rivers Is The daughter Of Doc Rivers And Kristen Rivers.

Callie was born to Doc and Kristen on September 17, 1989, in Atlanta, Georgia. All her three siblings: Jeremiah, Austin, and Spencer, are athletes or former athletes. As aforementioned, Jeremiah and  Austin were NBA players, whereas her youngest brother Spencer played as the shooting guard at UC Irvine. Callie went to Winter Park High School and later on to the University of Florida.

Paul George Had Cheated On Her

Apparently, Callie was dating Paul George, who played for the team her dad Doc Rivers was coaching. Everything was going fine until she found out that Paul had been cheating on her with some stripper while in Miami. Daniela Rajic, the stripper, was pregnant with Paul’s baby while Paul objected to it. They had a paternity test, and Paul was found guilty. Callie was heart-broken, but her supportive family had her back, and she got over it- really soon.

Callie Rivers And Seth Curry Have A Daughter Together

Soon after splitting up with Paul, Callie became closer to Seth Curry, who is also an NBA star like her brother, Austin, and father, Doc. The increasing closeness resulted in a relationship. When Austin found out that Callie was dating some NBA guy, he was pretty worried, but he was relieved after he found out that the guy was Seth. Austin and Seth had played together for Duke University.

They soon gave birth to a baby girl, Carter Lynn Curry, on May 9, 2018. We can see some of her cute photos on the Instagram handle of her parents.

After nearly one year of having their daughter Carter, Seth realized that he wanted to be Callie’s significant other for the rest of his life. Before proposing Callie, he asked Doc for his daughter’s hand through a phone call. It was very considerate of him. Seth proposed to Callie on Valentine’s day of 2019, which made the day even more special for the couple. Callie said yes, and the wedding date was set to September 14, 2019.

On the wedding day, Callie looked stunning in a lace mermaid gown with a bustier-styled corset while Seth was dressed up in a blush-colored suit. Their one-year-old daughter Carter was brought down the aisle by -the two flower girls- nieces Riley and Ryan Curry. Stephen Curry was the best man. Callie and Seth exchanged vows in a spectacular set up on the shore of the Pacific Ocean in Malibu, California. What a romantic destination to be married in.

Callie Is The Knot Between Two Big Names Of NBA

Callie was mostly known for being the daughter of Doc Rivers and sister of Austin Rivers. By now, we have known that her family is full of athletes, but that’s not the end of it. Callie is also married to Seth Curry, who is an NBA player himself. Seth plays for the Dallas Mavericks. Seth is the brother of the golden boy in the NBA- Stephen Curry. Together, they are the sons of the former NBA player Dell Curry. The Rivers and the Currys make one big NBA dynasty. Her two families have always motivated her to step up for herself.  No wonder she is mentally and physically tough.

Callie Is A Former Athlete

Initially, Callie played volleyball for Winter Park High School. She set a number of school career records there. In 2006, she got the title of  Florida Gatorade High School Player of the Year. Seth Curry’s wife, Callie, also played for the USA Junior National A2 Team. She then played for the University of Florida and reached heights, which got her into the Leonas de Ponce in the Liga de Voleibol Superior Femenino. As of now, she has already announced her retirement.

To add more to this, even her mother in law Sonya Curry and sister-in-law Sydel Curry are former volleyball players.

While going through her Instagram handle, we can see the photos of some of the singers like Rihanna and Adele. Since she does not post a lot of stuff on her Instagram account, we can say that the artists’ pictures mean something to her. She seems to have good taste in music. We can also look at her wedding day’s video to see how much of a free-willed person she is. She enjoys listening to different kinds of songs and does not hesitate to put on her dancing shoes if she vibes in with the song.