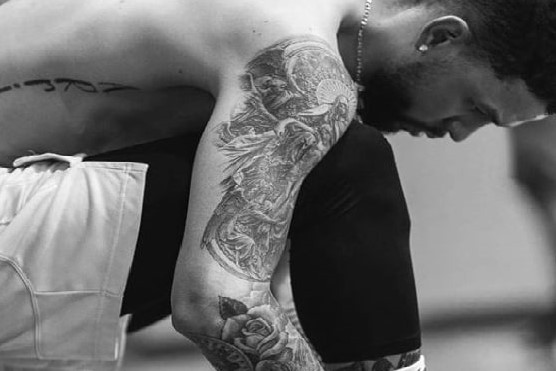 Tattoos have become more popular than ever, and people have started to normalize a practice that otherwise used to carry a social stigma. According to the 2015 Harris Poll, almost half of all the millennials in America are inked, and basketball player Austin Rivers is one of them.

Austin Rivers is not a new name if you follow the National Basketball Association, NBA. As of now, he plays as the point guard of the Houston Rockets. Since we already know that basketball is his forte, so in this article, let’s talk about his next interest, which is tattoos.

Austin Rivers got his first tattoo while he was in ninth grade, and he has been continuing to get inked since then. He not only has one of the best tattoos in the NBA, but he also has a tattoo which he calls ‘poorly made’ and tries to cover it up as much as possible. He thinks it’s weird to call the process of getting inked is painless; however, he thinks that the pain is worth the outcome. Betwixt his love for tattoos, he has said that he will never ink anything on his neck and face.

Man On A Mission (MOAM)

As mentioned above, this was the first tattoo Rivers ever got. In one of his interviews with GQ Sports, he mentioned that the song Ink My Whole Body by Wiz Khalifa was an inspiration for his tattoo. He had also mentioned that his mom was furious on seeing his first tattoo. However, his mother is over it and does not care about it anymore.

A Cross And A Faith

Rivers has one tattoo on the ulnar border of each hand.

Rivers has a Cross on his right hand and Faith written on his left hand. This quite portrays him as a religious man.

The tattoo basically represents his life. The NBA star got this tattoo on May 25, 2012.

Rivers has inked ‘Dedicated’ and ‘Determined’ on the edge of the middle finger of his right hand and left hand, respectively. He got it while he was in high school. In one of his recent interviews, he said that he doesn’t like the tattoo anymore. Although he has not redone this tattoo,  it seems quite blended.

The basketball phenom has a scripture-like tattoo on his chest. As aforementioned, he does not like the tattoo very much and tries to hide it up to the hilt.

The Houston Rocket’s Point Guard has a phenomenal tattoo on his right shoulder. It is a tattoo of Jesus just after he was sacrificed and taken off the cross with his mother Mary holding him and angels comforting him with detailed drapery. This took thirty hours. He did it in three days straight, 10 hours a day. This is his most detailed tattoo.

The Tattoo On His Left Hand

Rivers has only one tattoo on his left hand, which features a collection of quotes. People often ask him if that’s scripture, but it’s not. The tattoo is mostly about overcoming fears, dealing with failures, and understanding it is a part of success. He got it while playing for his father in team LA Clippers.

It was the most painful tattoo that he has got. His back of the calf was really stung, making it painful.

Rivers has a few more tattoos on his right hand. He has got some flowers, clouds, a lion, and his own hands inked in order to connect all the tattoos. It’s all about maximizing himself and remaining happy.

Since Rivers regret some of his tattoos, he’s become more careful as of now. Sometimes he prints out the tattoo before inking it and looks at it on himself and sees how he likes it – before deciding to get one. Not only that, but he also has a list of his best tattoo artist, which consists of Chuey Quintanar, Jun Cha, and Freddy Negrete. All in all, these artists have really helped Rivers to portray who he really is on his tattoos.

We’ve already read how fond of tattoo Rivers is. Similarly, two of his siblings have also inked themselves. His sister Callie Rivers has two tattoos, and his little brother Spencer Rivers has four. Unlike the three siblings, Austin Rivers’ elder brother Jeremiah River doesn’t like the idea of getting inked. The three of the younger siblings are trying to get him into buying into it, but they haven’t been successful so far. Yet, they remain optimistic.