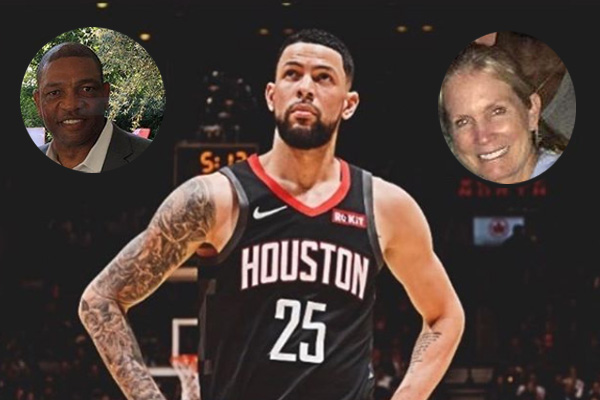 Austin Rivers is an NBA player who is currently playing for the team Houston Rockets. The 6 ft 3 inches tall player has been a major part of the team since 2018. Austin is yet to make an appearance in the All-NBA teams, but the 28-year-old is looking promising, so we will probably see him making headlines soon in the future.

Austin was trained by his father Doc Rivers, who is also a former NBA player and the current coach of the Philadelphia 76ers. But in this article, we will be discussing about Doc Rivers’s wife and Austin Rivers’s mother, Kristen Rivers. Kristen is a socialite and is a loving mother who his very fond of her children. Let’s go through her life to know about this strong woman and a wonderful mother.

Kristen Rivers is pretty secretive about her personal life; besides being Doc Rivers’s wife and Austin Rivers’s mother, she remains hidden under her own curtain. Her limited media appearances are to either watch her son’s game or her husband’s. But one thing is certain that Kristen is a loving mother. Only because of her unaltered love for her children they have gained a lot of success in their life.

One thing is pretty certain that Kristen loves privacy and does not like the spotlight. While her professional and personal life remains all speculations and assumptions, we have to remain positive and hope that she comes out in the media soon.

Doc Rivers and Kristen married in 1986, but things did not go as smoothly as it should have gone. The two shared a troublesome relationship for quite some time. The two are reported to have been separated for about five years. While their relationship remains uncertain, their four kids – Jeremiah Rivers, Callie Rivers, Spencer Rivers along with Austin- have all grown up, so it probably won’t hamper their physical growth.

Are The Pair Divorced?

As reported by The Sun, the former LA Clipper’s coach Doc Rivers and his wife Kristen have been trying to divorce for the last two years. The couple has been separated for five years now, so it is more than likely they will officially divorce soon. The prolonged period for the divorce might be due to the assets separation and their children, but as all of them are adults now, it probably won’t take long.

Dan and Kristen have been married for more than 34 years, but unfortunately, they too had to suffer from separation. Let’s hope this won’t hamper much of the family dynamics of the Rivers family.

While his divorce process is still ongoing, Kristen’s husband Doc is already seen with his new love interest. Doc and his new girlfriend were seen together outside the private members’ club’s San Vicente Bungalows in LA. The two were seen lovingly wrapped towards each other while the woman leaned her head on Doc’s chest.

Doc must have wanted to reveal his newfound love after the divorce settlement, but even the person once considered one of the most powerful in the NBA could not avoid the paparazzi. While the woman’s identity remains a secret, she looks incredibly young and probably is in her late twenties. The divorce between Doc and Kristen seems unavoidable, so we have to be patient to know more about Doc River’s new girlfriend.