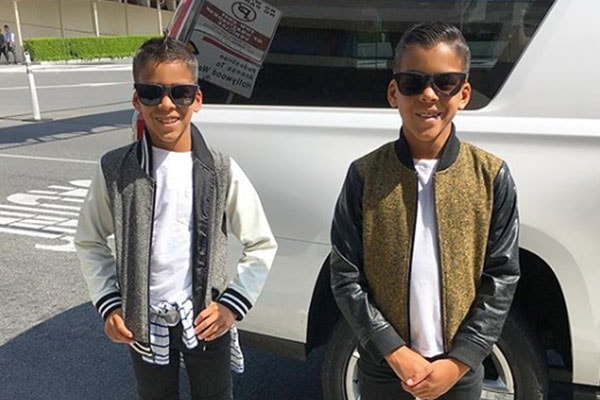 The American actress, Gloria Govan‘s son Carter Kelly Barnes, was born on the 6th of November, 2008 alongside his twin brother Isaiah Michael Barnes. During the time of birth, Carter was weighed in at 5 pounds 6 ounces. Gloria had her twins with ex-husband Matt Barnes.

Carter is five minutes younger than his elder twin brother Isaiah. Besides his twin brother, Carter doesn’t have any siblings. But at the moment his father’s girlfriend or Matt Barnes’ partner Anansa Sims is pregnant, so he can be getting a new younger half-sibling any day soon. And as for Carter’s mother Gloria, she is engaged to her beau, Derek Fisher.

Carter Kelly Barnes has got an Instagram account under the name of “thecarterbarnes” which has got over 2000 followers as of November 2018. The account hasn’t posted anything yet. But he has a joint Instagram account with his elder twin brother Isaiah Michael Barnes named “thebarnesboys” which has got over 29.4K followers. His mother Gloria Govan initially runs the account, but we believe when he and his brother is old enough they will handle it on their own. The account is filled with photos of Gloria Govan’s sons Carter Kelly Barnes and Isaiah Michael Barnes. And it looks like Carter and Isaiah have a lot of fun.

Carter alongside his elder twin Isaiah goes to the beach, attends soccer games, plays basketball, golfs and other many more fun-filled activities. Plus like any other twin siblings, Carter and Isaiah also tend to wear matching clothes.

Despite being divorced, Carter Kelly Barnes’ parents, Gloria Govan and Matt Barnes are on good terms and co-parent to give their children a beautiful childhood. But in the past, Matt and Gloria had their differences.

Gloria Govan along with Christopher Heller has started a clothing line under the name of ‘Kelly Michael,” combination of the middle name of Gloria Govan’s twin children. The brand provides a different kind of products which includes t-shirts, bombers, coats, and accessories.

So we can say that Gloria Govan’s son Carter Kelly Barnes is some kind of a model himself.

The name Carter is of English, Scottish and Irish origin. It is an occupational name given to a person who transports goods via a cart.

As for the name Kelly, it is an ancient Irish name which means ‘bright-headed.’