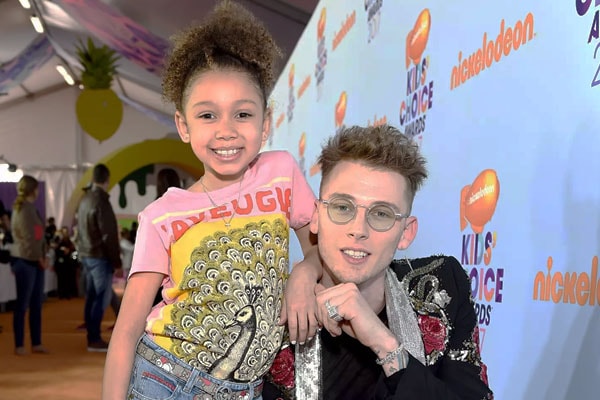 Machine Gun Kelly aka MGK‘s daughter, Casie Colson Baker, was born on the 23rd of July 2008. MGK had Casie with his baby mama named Emma Cannon. The pair apparently met at a Blink-182 concert and welcomed their daughter the same year.

Despite having a daughter, MGK and Emma did not tie in a marital relationship, and fans still wonder who will become rapper MGK’s wife.

Casie Colson Baker is the only child of MGK. She has not got any siblings from her father’s side. Casie’s father Richard Colson Baker famously knows as MGK was just 18 years old when she was born. Casie’s parents no longer stay together and have already parted ways, but it is reported that they both are on good terms.

It has still not been disclosed whether MGK’s daughter Casie lives with him or his baby mama, but it seems like the father-daughter duo tends to spend a lot of time together. In an interview with Jen DeLeon, MGK stated that his daughter has the cutest waking up face. According to Machine Gun Kelly, when he is with her, nothing else matters.

Casie grew up in an awful neighborhood. At that time MGK wasn’t very much popular and wasn’t earning that much. So he had to steal diapers and warmers. As stated earlier MGK was just 18 when he had his daughter Casie, and he did almost anything to provide his little one with whatever she needed. It is evident that MGK’s newsfeed is filled with his stuff, but at times he uploads videos and photos of his daughter.

Once MGK uploaded a video of him and his daughter Casie Colson jamming together in his hit song Habit, and a lot of fans adored it.

And it looks like whenever Casie and her father catch up with one another, they always have a blast.

Like many other doting fathers, MGK has been by the side of his little girl whenever she needs him. We are sure though that Casie must consider herself one lucky girl to have found a father like Machine Gun Kelly.

The name Casie has got different meanings in different origins. In American, Casie is a diminutive form of Cayce which means alert and vigorous. As in Greek, it is a pet form of Cassandra. And for the name Colson, it means swarthy or coal black.