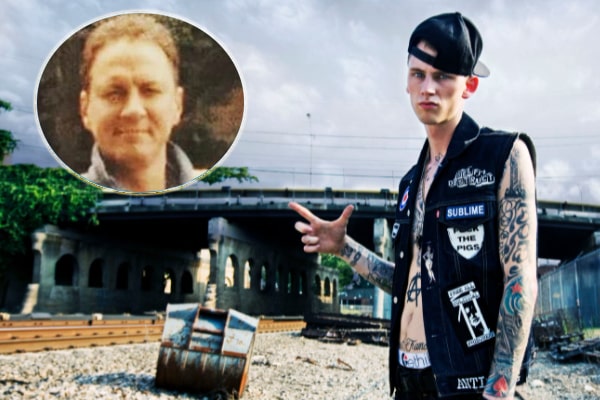 MGK was beside his father at his final moments. Image Source: Social Media.

Machine Gun Kelly, a rapper better known for blending contemporary and alternative hip hop with rock, is also an actor and songwriter. Born as Richard Colson Baker on April 22nd, 1990, the singer has a huge fan base.

Globally known as MGK, the artist has already has had accomplished a lot in his music career despite having a troubled upbringing. Despite being such a big music sensation, details regarding his parents are kept in the shadows.

So much so, the names of MGK’s father and mother are still not known to the general public. Nevertheless, in this article, we look into MGK’s father, who has passed away, and try to get a picture of who he was.

As mentioned above, details regarding the rapper’s parents are completely off the books. However, Baker’s parents were missionaries, due to which he was exposed to many cultures.

My Ex’s Best Friend singer resided from Egypt to Germany and also throughout the United States. The 31-year-old moved to Chicago, Denver, and Cleveland, in the U.S.A where he became a household rapper.

After his father parted ways with his mother, they settled in Denver, Colorado, and later moved in with his aunt. In Denver, the winner of 2021’s Billboard Music Award for Top Rock Artist would begin listening to rap music.

MGK’s father would leave him behind with his aunt mainly because he suffered from depression due to unemployment.

After leaving his son behind with his aunt, the rapper’s father returned in 2005 to take him to Kuwait, but the pair would move to Cleveland instead, where the Bloody Valentine singer would begin his music career.

MGK was never able to connect with his father as he was not there most of the time.

After the Wild Boy singer’s father left him behind with his aunt, not only he began listening to rap music, but he was also bullied in his neighborhood.

MGK drew inspiration from Ludacris, DMX, and Eminem. Without his father by his side, young Colson became somewhat of a menace which he still is currently.

It remains unclear how MGK’s father fought depression and what he was up to during his absence. However, since he came back in 2005 to take his son to Kuwait along with him, we can assume he might have had a job opening there or was planning on searching for a job there.

The rapper’s work on Chip Off the Block, Wild Boy, Gone, and Young Man is inspired by the lack of parenting in his upbringing, especially being abandoned by his father.

Never Got A Chance To Say Thank You

On June 5th, 2020, MGK’s father passed away due to liver issues unrelated to COVID-19. The 31-year-old made his thoughts clear and stated on his social media platform about the saddening news.

MGK recalls how his father was there for him all the time when they moved to Cleveland. Baker, Sr. paid tens of thousands of dollars for the time his son got arrested, knowing how much of a rule-breaker he was.

i had plans for the one year anniversary of Hotel Diablo today.

but my father took his last breath this morning, and ive never felt a pain this deep in my life.

i’m setting my phone down.
love you.

Speaking to British GQ, the rapper mentioned that it would have been his dad if he was to apologize to any one person. MGK, the father of Casie Colson Baker, compares himself with his daughter based on following rules and regulations.

Casie Colson has never caused any major problem, but her dad was on a completely different level. It took the father-son duo 25 years to get along, and MGK never got the chance to say how much sorry he was and how much he loved him.

Tribute To His Father

MGK’s father passed away on the anniversary of his hit and emotional album Hotel Diablo. The album Tickets to My Downfall was released a couple of months after his fathers’ death.

The song titled “Lonely” is dedicated to his father, who overcame depression on his own. He even performed Lonely on Saturday Night Live on January 31st, 2021, filled with emotions. The Pop Punk album is considered to be one of MGK’s finest works.

In his last moments, MGK and his father shared a glass of whiskey and sang Neil Young‘s “Old Man.”

As he was admitted to the hospital due to liver issues, he basically drank himself to death. In an interview for The Howard Stern’s Show, Baker gave an insight into how they spent his final moments together.

The rapper mentions how both he and his father were alcoholics and how difficult it was to open up to him for the first and last time.

Nevertheless, MGK is grateful to his departed father for all the troubles he went through to be close with him.