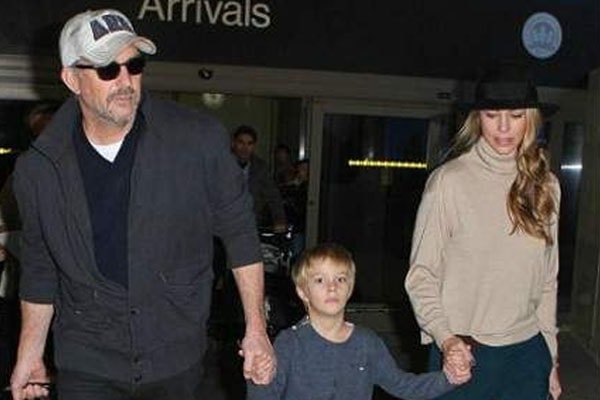 Kevin Costner‘s son Cayden Wyatt Costner was born on 6th of May 2007 in LA, California. Kevin had Cayden together with his wife Christine Baumgartner. Cayden’s parents Kevin and Christine tied the wedding knot back in 2004 at his 165-acre ranch in Aspen.

Cayden Wyatt Costner is not the only child of the famous Yellowstone movie star, Kevin Costner. Cayden is the middle child among his six other siblings. He has three all grown up half-siblings named Annie Clayton Costner Cox, Joe Costner, Lily Costner from his father’s previous marital relationship with Cindy Silvia.

Not only that but Cayden has a half-sibling named Liam Timothy Costner from his father’s relation with Bridget Rooney. Finally, he is the eldest among his own siblings Hayes Logan Costner and Grace Avery Costner.

Cayden Wyatt Costner Is The Son Of Legendary Hollywood Actor

Cayden Costner is the 12 years old son of decorated Hollywood actor, Kevin Costner who imprinted his designation in the showbiz having won 3 Golden Globe Awards and one Emmy award. While his mother Christine Baumgartner is a former model and a handbag designer.

Just like his father, Cayden has won the heart of many audiences and media with his cuteness. He is mostly seen accompanied by his actor-dad at the star-studded events of Hollywood including movie premiere and red carpet.

Growing up with three adorable siblings to accompany by in a well-heeled household, he obviously might be having a salubrious childhood. Kevin Costner’s son Cayden is in his mid-school and yet has a lot of time left to follow on his father’s footsteps.

Being the eldest son of Kevin and Christine together, Cayden might be a rising star to be reckoned with in coming days. His endearing looks and stardom nature has been cherished from the early days as he seems to enjoy the media limelight along with his established father.

Born in a well-off household with parents’ massive fortune, he is provided with all sorts of comforts and luxuries. Kevin Costner’s son Cayden has already been blessed to make it into the Hollywood which many emerging stars die to make, all thanks to the growing fond of limelight having present at the star-studded events.

Cayden is a boy’s name of Gaelic origin meaning “battler or fighter.”