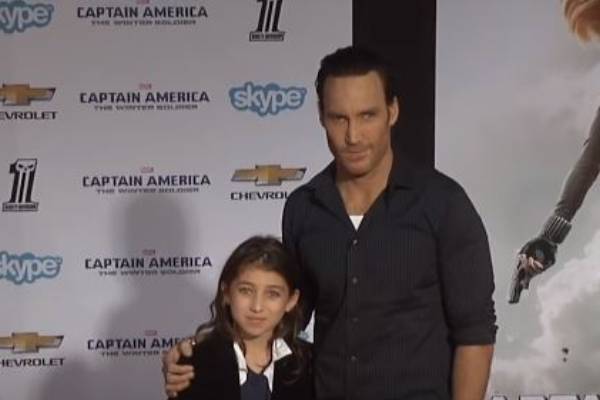 Callan Francis Mulvey, aka Callan Mulvey, is an Australian actor who came into prominence from his role as Mark Moran on the Australian drama Underbelly. Apart from that, he has acted in various other movies and series.  Besides Australian roles, he is also famous for his American roles in several films like Batman V Superman: Dawn of Justice, Captain America: The Winter Soldier, and many others.

Callan is one of the successful actors of his time. His spectacular acting skills have helped him garner several awards and nominations. Apart from being an excellent actor, Callan is a family man and loves to enjoy his family time. He enjoys a blissful marital life with Rachel Thomas, and the lovely pair together have a son named Charlie Mulvey.

Callan is one of those actors who prefers their private life away from the spotlight. However, his fans are curious about the handsome actor’s family and their whereabouts. Well, that’s a story for next time. For now, let’s learn about Charlie Mulvey, Callan Mulvey’s son, with Rachel Thomas.

As stated earlier, Callan Mulvey is happily married to Rachel Thomas. Professionally, Charlie’s mother, Rachel, is a school teacher and musician. The lovely pair exchanged vows in November 2010 in an intimate ceremony in Byron Bay hinterland. They are doting parents to a son named Charlie Mulvey, whom they welcomed in 2004. Charlie is the only son of the pair. Callan has talked about his fatherhood experience in various interviews. He once mentioned that fatherhood is indescribable, and he is very much in love with his son.

Although Charlie’s father feels his heart has exploded open after experiencing fatherhood, Callan seems skeptical about welcoming another life. Moreover, during an interview, he vaguely indicated that one is enough. He further added that he wants to have all the time in the world for his kids. Hence, this blandly indicates that Charlie Mulvey’s chances of being an older brother are less.

The lovely pair of Callan Mulvey and Rachel Thomas are raising their child with great love and care.

Was The Ring Bearer At His Parent’s Wedding

Aforementioned, Callan Mulvey’s partner Rachel Thomas gave birth to their son, Charlie, in 2004, way before they got married. Charlie’s parents met in 2002 when he moved to Byron Bay to focus on music. They remained friends for some time and then dated for several years before tying the knot. The duo, who had been living together since the beginning of their relationship, are raising their child with great care. They also managed to survive a long-distance love while Mulvey was in Melbourne filming Rush and Thomas based in NSW.

After being in a long-distance relationship for a while, Mulvey proposed to his long-time girlfriend, Rachel Thomas, while they were holidaying in Bali. In November 2010, Charlie’s father and mother exchanged vows in front of 25 guests in the Byron Bay hinterland, and he was the ring bearer. Charlie must have enjoyed the wedding of his parents.

Attends Premieres With His Dad

Callan Mulvey and Rachel Thomas’ son Charlie Mulvey is now 16 years old and is enjoying his teenage years. He has already come into the limelight as Callan Mulvey’s son and occasionally accompanies his parents in a few award functions.

Likewise, in 2014, Charlie joined his father in the “Captain America: The Winter Soldier premiere show. Furthermore, his mother also accompanies them to different events. Hence, Charlie’s parents are doing great in their respective professions all while raising him privately.

Charlie Mulvey is the only son of Callan Mulvey and Rachel Thomas. The lovely boy, who is now in his teenage, must be enjoying his life and living a comfortable life with his parents. A year before he was born, Charlie’s father, Callan Mulvey, got into a serious car accident. The accident that happened in 2003, near Byron Bay on New Year’s Eve, was a head-on collision at 100 km/h.

Charlie’s dad, Callan, had a full facial reconstruction after surviving the fatal crash. The left side of his body was completely crushed, and he even lost his vision in his left eye. Following the accident, Callan faced months of treatment and was finally able to get involved in various projects. However, he mentioned that he still gets a headache due to the injury. Other than that, he is doing really fine and is achieving significant success at his work.

Despite the immense fame and recognition that Callan has earned, he seemed to prefer his private life away from the media and limelight. Just like him, his son also prefers to keep his life lowkey. Charlie and his parents do not seem to be active on social media, due to which there is not much information about them.

We can hope that they all are doing fine for themselves and living a comfortable life.

The name Charlie has an English origin, and it means “Free Man.”