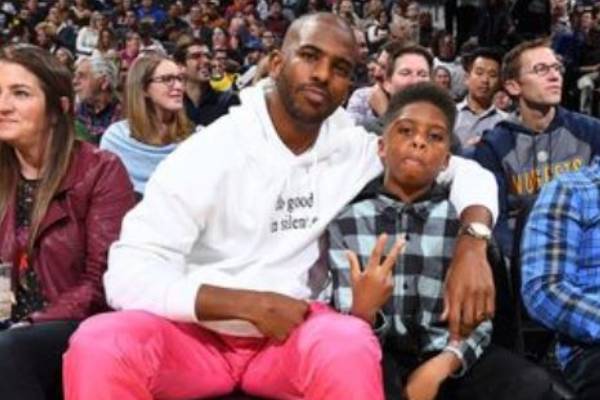 If you are a basketball fan, then you might be familiar with the name Chris Paul. If not, then he is a professional basketball player playing as a point guard for the Phoenix Suns. All thanks to his accomplishments, he is considered one of the greatest players.

Because of his fame, Chris’s family has also come into the limelight. Moreover, his son seems to have already made a name for himself in the basketball world. People want to know about the NBA player’s kid. Thus, in this article, let’s know in detail about Chris Paul’s son, Christopher Emmanuel Paul II.

Was Born Before His Parents’ Wedding

The basketball star is a proud father of two children whom he shares with his wife, Jada Paul. The couple has been sharing a blissful marital life since September 10, 2011.

Chris and Jada dated for many years before exchanging vows. Moreover, the duo had already started to grow their family before tying the knot. Two years before their wedding, in May 2009, Chris Paul’s son, Christopher Emmanuel Paul II was born. However, Christopher’s parents did not share much information about him initially.

Also, the young man has a younger sibling. Christopher Emmanuel Paul II’s sister, Camryn Alexis Paul was born on August 16, 2012, a year after his dad and mom tied the knot.

Christopher loves his little sister and is pretty close with her. He must be having a wonderful time growing up with her.

Has Already Started To Play Basketball

Growing up, Chris Paul’s son, Christopher got directly involved in basketball sports. Being the child of a player, he must have seen the in and out of the sport from a very young age.

Furthermore, Christopher’s dad trained him really well. Even during the pandemic, while they were in quarantine, his papa helped him fine-tune some of the techniques on the court. The techniques and skills that Chris has passed on to his son might be helpful for him in the future.

Going through his Instagram, we can see that Christopher has already started to showcase his excellent skills while playing with the team. Furthermore, he has even collected several trophies after winning numerous tournaments.

In December 2020, Paul Jr. challenged his dad to a free throw shooting competition. In a video that his father posted, he hit the first three shots but missed the fourth. Well, there’s no need to say how Chris won the challenge; after all, he is one of the greatest point guards in the NBA.

CP3 had to teach his son a lesson real quick… wait till the end 🤣 @CP3 pic.twitter.com/nF089V7DIb

After watching his dad, Christopher immediately apologized. But we can see that he has inherited his father’s shooting skills and with time Chris Jr. might even beat the NBA star.

Christopher is already gaining fame as the next Chris Paul. His playing skills might help him establish himself as one of the greatest players of all time, like his dad.

Chris Paul’s Son Is Involved In Other Activities

As an athlete’s son, Christopher has become an all-rounder. While basketball has become his main thing, he is also involved in other different activities.

Firstly, Chris Paul’s eldest child is already an Instagram star as he has over 280K followers. His parents handle his account, and most of his posts are related to basketball.

But besides the sports, Christopher is also interested in fishing and swimming. Moreover, he seems to be an outgoing person. He has posted videos and photos of him attending matches in several sports and even playing soccer. He can be seen making a presence with his family at different social events.

Chris Paul’s baby boy seems to be living a wonderful life. He currently plays for his school team. But we do hope to see him play for one of the NBA teams in the coming days. We wish Christopher Emmanuel Paul II a successful future.

Chris Paul’s son is named Christopher. It is a Greek name, and it means Christ-Bearer. Similarly, his middle name Emmanuel has a Hebrew origin, which means God Is With Us.