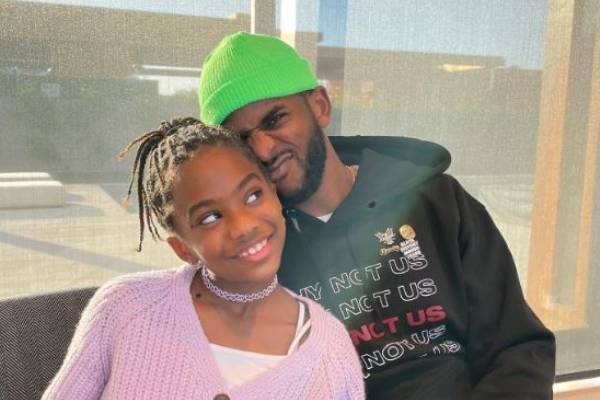 Chris Paul is a renowned name in the basketball world. He currently plays as a point guard for the National Basketball Association (NBA) team Phoenix Suns and has been considered one of the greatest point guards in history.

Chris’s professional fame has resulted in his immense popularity globally. Because of that, his two kids have also come into the limelight and have already gotten the taste of being celebrity figures at a very young age. Fans want to know how Paul’s children are growing up.

The famous basketball player is a doting father of two children. He shares his kids with his wife, Jada Paul. The couple met at college and dated for many years before walking down the aisle on September 10, 2011.

A year after his marriage to Jada, on August 16, 2012, Chris Paul’s daughter, Camryn Alexis Paul was born. She is the only daughter and the youngest child of her dad and mom. Hence, Camryn must be pampered really well by them.

Moreover, Camryn also has an elder brother, Christopher Emmanuel Paul II who was born in May 2009, three years earlier than her. The Paul siblings must be having a great time growing up together.

From a very young age, Chris Paul’s daughter, Camryn Alexis Paul came into the limelight because of him. The celebrity kid also has an Instagram account to her name, which is handled by her mom and dad. Camryn has also already become an Instagram star as she has over 6K followers.

Going through her Instagram, we can see that Camryn is a cheerful girl. The account also features some pictures of her being silly. Moreover, the little one has a dog named Coco and has photos with it.

Camryn’s Instagram posts suggest that she is a creative girl. She loves to draw and has even joined art classes.

Furthermore, Chris’ baby girl is also interested in several outdoor sports like swimming, tennis, etc. She has traveled to several places, including Disneyland, waterparks, and many other places.

Fans are awed seeing her adorable pictures. Nonetheless, she seems to be living a wonderful life with her family.

In February 2022, Chris received the Kobe & Gigi Bryant WNBA Advocacy Award. Upon receiving the honor, Camryn Alexis Paul’s dad expressed pure excitement via Instagram. He wrote that basketball meant so much to him and his family, and it was an absolute honor to receive the award.

Camryn’s papa further added that she had recently begun hooping, and he was excited for her and for the future of basketball. Many fans have anticipated her to follow in her dad’s footsteps.

This games means so much to me and my family… to receive this award is an absolute honor. My daughter recently started hooping and while I’m excited for her, I’m most excited for the future of the sport. (1/2) pic.twitter.com/rfCWnrv51N

Being born to a basketball player, Camryn must be getting trained by the player himself. Chris might be working on teaching some of his basketball tricks to his children. Who knows, his daughter might become a successful WNBA player in the coming days.

Well, Camryn still has a lot of time to figure out what she wants to pursue in the future. But, whatever her career choice might be, her parents will support her wholeheartedly. Nonetheless, let’s hope the little one has a successful and wonderful life in the coming days.

Chris Paul’s daughter, Camryn, is an American name that means Crooked Nose. Similarly, the name Alexis has a Greek origin, and it means Defender Of The People.