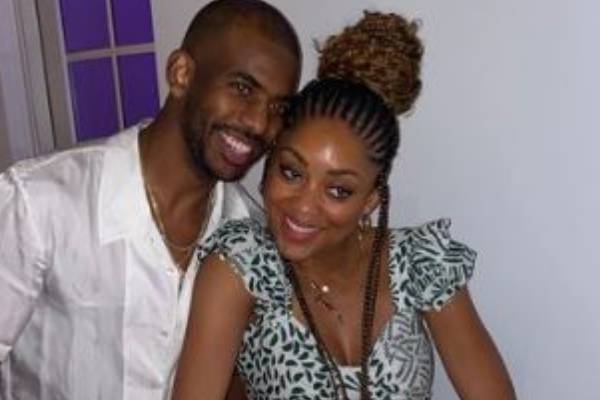 The Phoenix Suns is a basketball team competing in the National Basketball Association. The players and coaches associated with the team or any other basketball teams come into the limelight once in a while. One such name is Chris Paul. Christopher Emmanuel Paul is also famous by the nickname “CP3”.

As Chris has remained in the limelight for many years, his love life and kids have also become celebrity figures. He shares a blissful marital life with Jada Paul. Hence, let’s take a look at five interesting facts about Chris Paul’s wife, Jada Crawley.

Born And Raised In North Carolina

Chris Paul’s lovely spouse was born Jada Alexia Crawley on February 16, 1984. Jada was born and raised in Winston Salem, North Carolina. She is the only child of Alex Crawley and Jackie Crawley.

Chris And Jada Are College Sweethearts

Jada Paul mainly came into the limelight after marrying the popular basketball player, Chris Paul. The couple has been sharing a blissful marital life for many years now. Jada and Chris are college sweethearts and have been together since they were 18 years old.

Jada met her now-husband Chris at Wake Forest University. A mutual friend had introduced him to her. Chris played two seasons there, and the duo actually met at a basketball game. Their first date was at the theatres, and there they watched Love Don’t Cost a Thing starring Nick Cannon and Christina Milian.

The lovebirds dated for some time and tied the knot on September 10, 2011. The married pair held their wedding at Ballantyne Hotel and Lodge in Charlotte. Several notable figures, including LeBron James, Carmelo Anthony, James Harden, and many others, attended the wedding.

Since then, the duo has been enjoying a love-filled marital life. The couple’s love has only grown stronger over the years. Chris and Jada often gush about their love and appreciation for each other on social media.

As mentioned earlier, Jada and Chris have been living a wonderful life together since their college days. In over a decade of togetherness, the couple became parents of two children.

Jada Crawley’s son, Christopher Emmanuel Paul II, is her eldest child with her husband. Chris Paul’s wife gave birth to him in May 2009, two years before their marriage. Moreover, Christopher Jr. often joins his dad in press conferences and is seen courtside during the player’s games.

On August 16, 2012, Jada and her husband welcomed their second child, Camryn Alexis Paul. The couple has made separate Instagram accounts for their children.

Jada Paul’s children seem to be growing up having a wonderful time. She and her husband, along with the kids go on vacations to different places. Let’s hope we can learn more about the Paul family in the coming days.

Chris Paul’s Wife Is A Philanthropist

Apart from being a full-time mother and a proud wife, Jada has also made a name as a philanthropist. Along with her hubby and other family members, including Robin Paul, C.J. Paul, Charles Paul, and Desiree Paul, she is the co-founder of the Chris Paul Family Foundation. The foundation aims to provide help to underprivileged families in North Carolina.

Additionally, Jada also runs a program named the Jada Paul Prom Dress Giveaway. Through this program, Chris Paul’s wife hosts high school seniors at a hotel. There, they are treated to a braid bar, fashion show, makeup tutorials, and many more.

The senior girls who are invited to the event can select their own prom dress, purse, shoes, and jewelry. The giveaway is hosted in Los Angeles and Winston Salem, North Carolina. Many sites have suggested that she is a fashion designer. So, who knows she might be designing some of the giveaway prom dresses.

S/O to my wife @Jada_AP, the volunteers & all the sponsors that made our Foundation’s 6th Annual Prom Dress Giveaway a success! #BeAQueen pic.twitter.com/K74PHdrtLM

Chris Paul’s spouse, Jada, is also an Instagram star. With followers of 136K, it must have been easy for people to be aware of her philanthropic activities. Nevertheless, let’s hope she continues her generosity towards many people.

Apart from their blissful marital life, Chris and his spouse, Jada Crawley, are enjoying a comfortable lifestyle. Chris has earned a considerable amount as a basketball player. He has a net worth of $160 million.

Going through her Instagram, we can see that Chris Paul’s spouse has a huge interest in fashion. She has shared several pictures of hers donned in designer clothes.

Jada seems to be living a life full of luxury. All thanks to her and her husband’s net worth. Nonetheless, let’s hope we see Jada achieve significant success in the coming days.