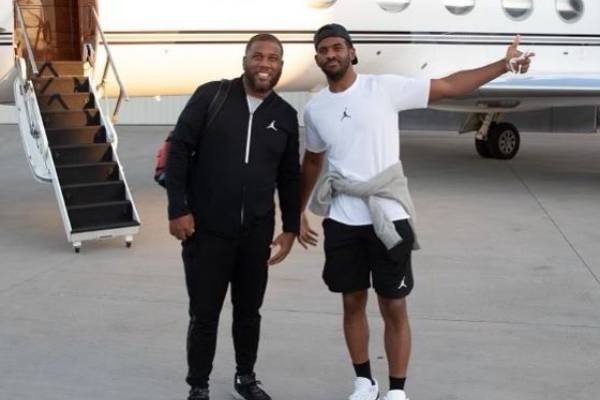 Christopher Emmanuel Paul, aka Chris Paul, is a professional basketball player playing for the Phoenix Suns of the National Basketball Association. Mainly known by his nickname CP3, Chris has been regarded as one of the greatest point guards of all time. He has won a number of championship titles and tournaments in his professional career.

Because of his exemplary playing records, Chris has remained in the limelight for many years. As a result, his parents and sibling, have also come to the media attention. Fans have shown curiosity to know about them. Thus, in this article, let’s get to know about Chris Paul’s brother C.J. Paul.

Eldest Child Of His Parents

Chris Paul was born to Charles Edward Paul and Robin Paul on the 6th of May, 1985. He is the youngest kid of his dad and mom. Well, the basketball player has an elder sibling.

Chris Paul’s brother, Charles “C.J.” Paul, was born in February 1983. C.J. and Chris grew up having a wonderful time together. Their dad, Charles, taught them football and basketball and even coached them in several youth leagues throughout their childhood.

Moreover, the Paul brothers were close with their grandfather, Nathanial Jones, and worked at a service station owned by him. The siblings are close even now and even have a professional relationship.

Chris Paul and his brother are known for having a great bond with each other. Additionally, Chris Paul’s brother has been with him throughout his 16-year NBA journey. C.J. has not missed any playoff games of Chris and has been his biggest supporter on and off the court.

C.J. had attended the University of South Carolina Upstate, where he received a degree in Management Information Systems. Prior to transferring to the Upstate, he spent a year at Hampton University. He played basketball at both colleges.

Furthermore, the basketball player’s elder brother has been serving as the president of Chris Paul Enterprise LLC and CP3 Investments. He must have a considerable income; as a result, C.J. Paul’s net worth must be a considerable sum.

Chris Paul’s Brother Is Married And A Father Of Two

C.J. Paul is enjoying his successful professional life and also living a blissful family life. Chris Paul’s brother, C.J. Paul, shares a blissful marital life with Desiree Paul. It is unknown when the couple met, but they met in New Orleans and began dating in 2008.

Three years after dating each other, C.J. and Desiree walked down the aisle on August 20, 2011. It already has been over ten years since the duo began their relationship, and their love life is going strong. The couple often gushes about each other on their social media.

C.J. Paul and Desiree Paul are co-founders of the Chris Paul Family Foundation along with their other family members. Furthermore, she is a writer and shares her thoughts through her blogs.

Moreover, the duo welcomed two children in almost a decade of being married. C.J. Paul’s wife gave birth to their twin son and daughter, Chloe Paul and Carder Paul, in December 2013. The little ones have a joint Instagram account where photos of their day-to-day life have been uploaded by their parents.

Going through their joint Instagram handle, we can see that C.J. Paul’s children are growing up having a wonderful time, and they both have already started school. The Paul family seems to be closely knitted. C.J. Paul, his wife, and his kids are close with his parents, brother, sister-in-law, Jada Paul, nephew, Christopher Emmanuel Paul II, and niece Camryn Alexis Paul.

Was Mistaken For Unruly Fan

Despite being in his brother’s every game and being his biggest supporter, C.J. Paul was once mistaken for an unruly fan and was nearly ejected from the game. During the third quarter of the match between the Rockets and Utah Jazz, the referee, James Williams asked for security to remove Chris Paul’s brother, C.J., from the baseline seat.

In an interview with ESPN, C.J. recalled how the referee had mistaken him for another man and accused him of making inappropriate comments. After Chris saw security escorting his brother past the Rockets’ bench toward the exit, he objected. Eventually, C.J. was allowed to return to his seat.

Chris and C.J., as mentioned above, have an incredible bond. They support each other and stand up for each other. Nonetheless, let’s hope C.J. has a successful career ahead and he gains significant fame and fortune in the coming days.