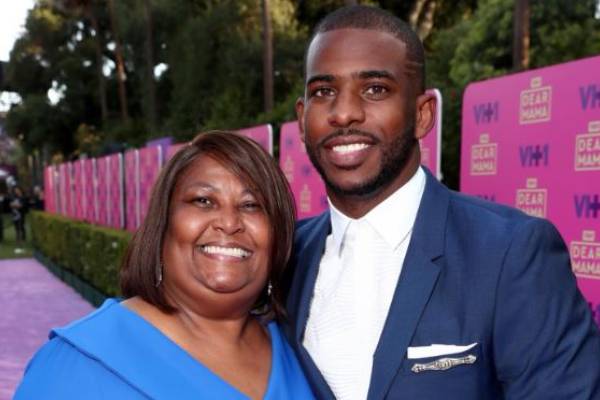 Chris Paul is a well-known basketball player who is a point guard for the Phoenix Suns of the National Basketball Association. The player is one of the greatest players of all time and has won many tournaments and prestigious awards, including the NBA Rookie of the Year, Olympic gold medals, NBA All-Star Game Most Valuable Player Award, etc.

Chris is one of the two children of Charles Paul and Robin Paul. His fans and followers want to know more about them. Hence, in this article, let’s learn more about Chris Paul’s mom and what she does now.

Born And Raised In Winston-Salem

Robin Paul was born Robin Jones in 1962 to Rachel H. Jones and Nathaniel Jones. She grew up in Winston-Salem with her sister Rhonda J. Richardson. Sadly, her mom passed away in February 1993. Likewise, her dad died on November 15, 2002. Jones was robbed and beaten to death in his carport outside his home.

Welcomed Two Sons With Her Husband

Robin shares a blissful marital life with Charles Paul. The couple grew up in Winston-Salem and met at Dreamland Park Baptist Church. Furthermore, their parents were friends. However, when the duo met, they did not like each other. Robin’s future husband thought she was immensely spoiled by her dad.

Robin babysat his siblings, and Charles Edward Paul used to go to her house. Eventually, the couple became church associates and friends. At that time, Robin and Charles were dating others. Nevertheless, they remained the same for a long time and began dating later.

In 1982, the love birds walked down the aisle. Then they started their family by welcoming two kids. In February 1983, Robin gave birth to Charles Paul Jr., aka Charles “C.J.” Paul. On May 6, 1985, she and her husband welcomed their second son, Christopher Emmanuel Paul, aka Chris Paul.

Robin’s marital life with Charles is still going smooth. Even after all these years of sharing married life, the pair’s love is stronger than ever.

Chris Paul’s mother is a philanthropist, and so is his dad. She is an active member of the Chris Paul Family Foundation and serves as one of the co-founders along with her husband, sons, and daughters-in-law, Desiree Paul and Jada Paul. The foundation was established in 2005 and has worked in partnership with Make-A-Wish, Boys and Girls Club, Feed the Children, and several other organizations.

Furthermore, Robin also serves as one of the board members of the Clemmons Community Foundation. She and her husband established Charles and Robin Paul Scholarship Award worth $2,000. It is awarded to adult students from Forsyth County, especially those who plan to attend Winston-Salem State University.

Chris Paul’s mother actively works in different other charity works. She even provided 725 pairs of sneakers to an elementary school in Charlotte, North Carolina. Her sons, too, have followed in her footsteps and are involved in charity.

Robin Paul’s husband was a sports fan and even coached their sons when they were younger. Likewise, she also coached her son’s team. When he was an eighth-grader, Chris Paul’s mother coached his YMCA team. Similarly, she was also his YBA team’s coach.

Robin and her husband have gone to many extents to fulfill their sons’ dreams. They sacrificed getting a new car, renovating their house, and many others to make sure Chris and C.J. get to their tournaments. Those sacrifices really paid off as their youngest son has become one of the greatest basketballers, and the eldest son has made a name for himself as the player’s manager.

Robin and her husband attend most of the games of their son and even represent him when he cannot participate in some events. She is extremely proud of Chris’s achievements. She is indeed a lucky woman. Chris Paul’s mom is a loving grandmother to Carder Paul, Camryn Alexis Paul, Chloe Paul, and Christopher Emmanuel Paul II.

As you can see, Robin is working on behalf of society, and it won’t be a surprise if she wins some awards for her charitable efforts.