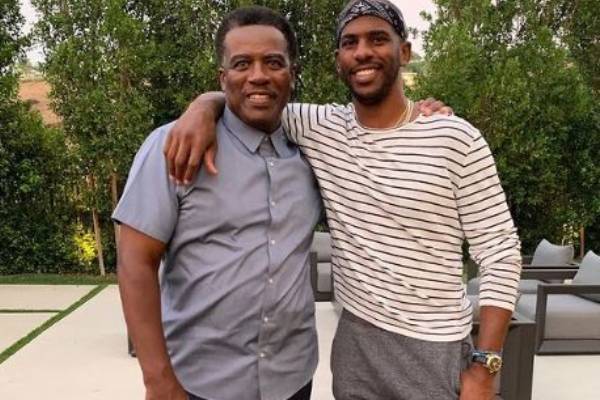 Chris Paul, nicknamed “CP3,” is a well-known basketball player from America. Born Christopher Emmanuel Paul, he is the point guard of the Phoenix Suns of the National Basketball Association (NBA). Having won several championship titles and awards, CP3 is considered one of the greatest players of all time.

Many might not know, but the basketball player was trained by his dad. His fans are curious to know about his papa. Thus, in this article, let’s learn in detail about Chris Paul’s father, Charles Paul.

Was Born In South Carolina

Charles was born Charles Edward Paul in Anderson, South Carolina, in October 1960. When he was four years old, his family moved to Winston-Salem. Chris Paul’s dad attended many schools due to forced busing. Eventually, he graduated from East Forsyth and enrolled at Winston-Salem State University.

Charles was a sports fan, and later his children too became the same.

Charles Paul and his wife, Robin Paul, went to the same university. Interestingly, they grew up in the same church. But their love story is a unique one. The couple met at Dreamland Park Baptist Church. At first, they did not like each other. In one interview, Robin revealed that Charles thought her dad spoiled her.

But eventually, the two of them came around each other. Robin used to babysit his siblings, and he used to come over. Slowly, they became friends and remained the same for many years. Then, the duo started dating. According to Charles, they went to the same church, and their parents were friends. When they were only friends and church associates, the pair also dated others.

Later, the duo started their relationship, which eventually turned into marriage in 1982. The smitten couple started raising a family by welcoming their eldest son, Charles Edward Paul Jr., also known as Charles “C.J.” Paul, in February 1983 and Chris Paul on May 6, 1985. The lovebirds are still together, and their marriage is stronger than ever.

As mentioned earlier, Charles was a huge sports fan. He played football at East Forsyth High School. After that, he continued playing different sports. His interest in sports instilled a love for games in his children too.

When Charles’ youngest son was in fifth grade, he built a small cement basketball court where both of his boys used to practice together. He loved going to the local gym to play basketball and to train his sons, he used to tie their right hands behind their backs to force them to use their left hands. Moreover, Charles even blindfolded his children.

Chris Paul’s father’s training paid off as Chris became good enough to play varsity basketball by the time he was a sophomore. Moreover, in one of the interviews, the basketball player revealed that his father convinced him to continue playing for the junior varsity team for another year to build his confidence.

Chris Paul’s father used to work in security at Aijis Mechtronics. It is a company that provides surveillance equipment for several businesses. Charles began coaching his sons and eventually coached different other teams. During Chris’ junior and senior years, he served as an assistant coach at West Forsyth. He has coached the YMCA and AAU teams in his son’s school since fifth grade.

Although Charles does not coach any teams now, he appears in every game of Chris. He and his wife represent their son at dinners and functions that he cannot attend. Chris highly regards his dad and mom’s support. Not only that, but Charles also gets respect from several other basketball players. In December 2021, Ja Morant gave his jersey to Charles after hitting the game-winner on the Suns.

Charles is extremely proud of what Chris has achieved. He often boasts about his son’s achievements in different interviews. He celebrates every victory of his son.

Is Involved In Their Family’s Foundation

Chris Paul’s parents have already retired from their job. Currently, they both are involved in the Chris Paul Family Foundation. It was established in 2003 in honor of Charles Paul’s late father-in-law, Nathaniel Jones, in a philanthropic partnership with the Winston-Salem Foundation.

Happy Father’s Day, from our family to yours 💚💙 pic.twitter.com/vebmYNpgEc

Furthermore, Charles is one of the co-founders of the foundation, along with his wife, sons, and daughters-in-law, Jada Paul and Desiree Paul. The organization works to provide resources to strengthen and enrich the healthy development of communities.