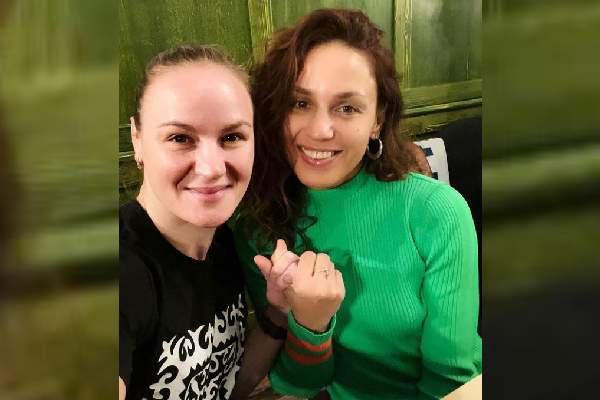 In the UFC ring, Valentina Shevchenko‘s spinning back fist, kick, and superman punch give fans the taste of the adrenaline rush they signed up for. Additionally, she utilizes her Muay Thai skills and freestyle wrestling techniques, making her one of the deadliest fighters in the women’s flyweight division. Another UFC fighter with a Muay Thai and MMA background who is just as fatal during each of her bouts is Antonina Shevchenko.

Two fighters with the same last names in the UFC vicinity made many curious if they are siblings or just have the same surname. If you want to know the truth about UFC Shevchenkos’ relationship, then you have come to the right place. In this article, we will discuss their family background and reveal whether Valentina Shevchenko and Antonina Shevchenko are related.

Are They Biological Sisters?

Valentina and Antonina are two great names in combat sports. They are both strong contenders with a huge fan bases. They both play in the same flyweight division, and UFC fans couldn’t help but notice their uncanny similarities. So naturally, people wanted to know if they were related. And the answer is yes. Valentina Shevchenko and Antonina Shevchenko are biological sisters. The UFC rosters not only share the same last name but have the same parents.

We are influenced by everything that is around us. From our surroundings to our friends, we are the mosiac of everyone we have known so far. But the most impact we have are from our family members. We grow up with our family in tight proximity, and we start to adopt each other’s quirks. And along with them, we too get influenced, for good or bad. But luckily for our UFC superstar Valentina, her influence was for the better.

Valentina started combat sports at age 5 under the influence of her older sister Antonina and her mother, Elena Shevchenko. Her mom is the president of Kyrgyzstan’s national Muay Thai association and a former multiple-time Muay Thai champion. Pavel Fedotov trained Valentina and Antonina. He was the one who gave Valentina her moniker Bullet after she knocked out a 22-year-old opponent at the age of 12. And he gave Antonina her moniker La Pantera.

Antonina Shevchenko is a Kyrgyzstan-born Peruvian Muay Thai and MMA fighter. Shevchenko made her MMA debut in 2002 and went on a 12-year hiatus. As of January 2023, La Pantera’s MMA record 10-4-0. After being a professional fighter for most of her life, Valentina Shevchenko’s sister wanted to become a pilot. With constant hard work and dedication for four years, she earned her private, commercial single- and multi-engine certificates and instrument rating. She is now a first officer in the Pilatus PC-12 for charter operator Tradewind Aviation.

While Antonina Shevchenko’s sister Valentina is at the pinnacle of her UFC career and currently ranks #2 in the UFC women’s pound-for-pound rankings, with Amanda Nunes at the top. Valentina is totally focused on her MMA career and has a record of 23-3-0 as of January 2023. Both sisters are doing their best in their respective fields, and we are inspired by what the Schvchenko sisters have achieved.

The Shevchenko sisters also created history by becoming the first pair of sisters to fight on the same UFC card. Valentina and Antonina won the bout against Jennifer Maia and Ariane Lipski, respectively. However, in an interview, Antonina had expressed that she would never fight her sister Valentina despite being in the same division at UFC. Individually both have shown their immaculate fighting skills and wowed the audiences.

Valentina and Antonina left a great and impactful legacy in combat sports. But apart from their career, many want to know about their personal affairs as well. The questions of who Valentina Shevchenko’s dating and who Antonina Shevchenko’s husband is are often asked. And we are here to answer them all.

The fighter-cum-pilot, Antonina, is married to her coach Pavel Fedotov. The exact relationship timeline of the couple is unknown as they have kept their relationship very private. However, we can see that Fedotov’s Facebook page is full of pictures of his wife Antonina and her sister Valentina. The trio shares a long history and is still seen supporting each other.

On the other hand, there’s been no information regarding our Bullet Valentina’s love life. She is soaring high up in success and working hard to improve and defend her title. Valentina has never shared anything about her relationship and has kept her private life away from the media’s attention. Shevchenko sisters are on their way to achieving legendary status in the sport, and we wish them even more success in the coming future.