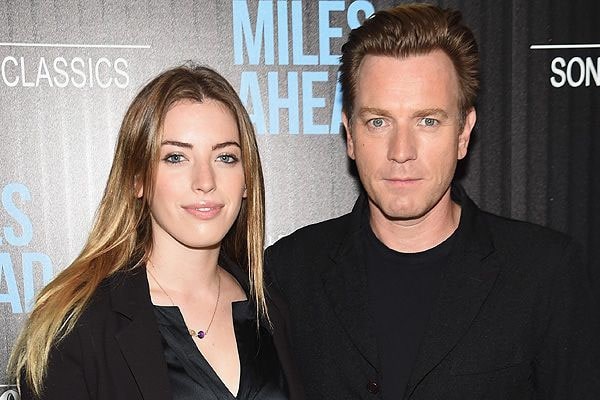 Clara Mathilde McGregor, Ewan McGregor‘s daughter was born in the month of February 1996. OBE actor McGregor welcomed Clara together with his ex-wife Eve Mavrakis. Clara is not the only child of the legendary actor. She has three siblings, including two sisters named Esther Rose McGregor and Jamyan McGregor (adopted) and an adopted brother named Anouk McGregor.

Clara Mathilde McGregor’s parents, Ewan and Eve, tied the knot back in the year 1995. After more than two decades, their marriage came to an end, and the exes got separated in 2018.

Clara’s life has always been an open book as she never hesitates to share her information. Now, let’s glance at her life’s each chapter and know more about Clara.

Ewan McGregor’s Daughter Is A Model

She also had an interview with Playboy, where Clara said that she did some modeling throughout college but now hopes to follow her father’s footsteps into the acting business. Clara dreams of working with photographer Lee Miller or Patti Smith on the big screen.

Besides, Clara completed her graduation from NYU in December 2017. Currently, she resides in Greenpoint, Brooklyn.

Wanted To Become A Photographer

The upcoming actress, Clara, had developed an interest in photography since high school. In an interview with Playboy, she said, “I was going to be a photographer, No! I’m not going to do what he (father Ewan) does! I’m going to be behind the lens.”

Ultimately, her modeling and acting skills proved stronger. Eventually, Clara transferred from the photo department to the film studies department and took an acting class and fell in love with it. Clara had already showcased her acting gig in a short movie she is directing and co-wrote with her friends. Moreover, she is occasionally seen on the red carpet with her father. The model also joined her father at the Tribeca Film Festival.

Apart from all these, Clara’s junior sister Esther was born in the year 2001. Esther is very close to her elder sister and also seems very much inspired by her career. Clara also enjoys hanging out with her 17-year-old adopted sister Jamyan and 8-year-old brother Anouk McGregor.

Had Some Issues With Her Dad’s New Girlfriend

Doctor Sleep actor, McGregor and his wife Mavrakis were married from 1995 to 2018. Just after their divorce, McGregor began dating Fargo co-star Mary Elizabeth Winstead. However, Clara didn’t seem to like the bonding and once lashed out at Winstead, calling her a piece of trash on Instagram. Later in August of 2018, Clara clarified the whole incident and told The Times,

“It wasn’t the most mature way to go about things, but I was angry and upset. There had been a lot building up to it and a lot to deal with — not to make excuses or anything — but, yeah, it wasn’t my finest moment.”

Now that it seems everything is okay between the two, but no one has closed the chapter completely.

According to the Daily Mail, Clara, 24, chimed in her sister’s Instagram post writing, “Love you boo. I’ll hop on the train and say I’m bisexual too. Carry on!”

Currently, Clara is in a relationship with her boyfriend named Jimmy. She is quite open about the relationship and shares the pair’s pictures on her social media handles. Clara seems to love spending time and enjoying with her current love interest, Jimmy.

Recently in December 2019, Clara McGregor’s boyfriend Jimmy was escorted out by the LA country club for animal cruelty. Clara explained that her boyfriend was only trying to save a runaway puppy and that they had some misunderstanding. She even took the matter to her Instagram handle and there she shared her dissatisfaction.

Had Some Psychological Health Issues

The model has also clarified her mental health issues and addiction problems through a post shared on 28 September 2019 via her IG account.

Whatever the case, the sensual model has won the heart of millions with her perfect charm and looks. No wonder why she has made her own fan following.

Announced The Arrival Of Baby Brother

Clara McGregor became an older sister in June 2021. The announcement was a surprise when Clara announced the birth of her baby brother via her Instagram.

Furthermore, Clara’s father, Ewan McGregor, and his partner, Mary Elizabeth Winstead, welcomed their first child, according to Clara’s post. She welcomed her little brother and congratulated her father and Mary via the Insta post.