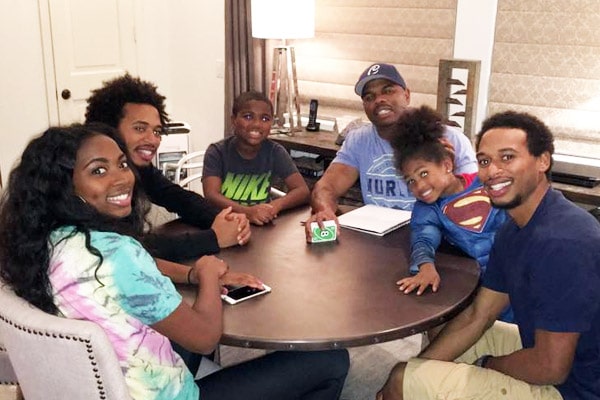 Curtis Conway is widely famous as the former NFL wide receiver. After 12 years of career in the NFL, Conway is currently working as a color analyst and studio analyst in Compass Media Networks. So, this is his professional career in short. Talking about his personal life, he is entirely a family man with a loving wife and five lovely kids.

Here in this article, indulge yourself in all the pieces of information you must know about Curtis Conway’s children. And YES, all five of them, three with former wife Leoria James-Conway and two with the present love, Laila Ali.

The Oldest Ones: Twin Brothers

Among the five stunning kids of Curtis Conway, twins Cameron Conway and Kelton Conway are the eldest ones from his previous relationship. Curtis welcomed his twin sons Cameron and Kelton in 1995 with ex-wife Leoria James-Conway.

Among the twins, Kelton chose to be in sports like his dad. He is a men’s basketball player. He assisted his team to its first City Section Division I championship in 2013-14 during his time in his alma mater. Kelton’s alma mater is EI Camino Real High School in Woodland Hills, CA. He graduated from there in 2014.

Talking about Kelton’s likes, his favorite team is the Lakers, and the favorite show is ‘Family Guy.’ Also, his favorite athletes are James Harden and Chris Paul. He wants to be a professional and famous basketball player like them in the coming days.

Coming to the second twin Cameron, he graduated from Los Angeles Pierce College. He also played football during high school, but later his interest turned into music.

As a result, Cameron, aka Cam, became a music artist based in Arizona, California. To date, he has completed two music projects, Genesis (2019) and Spoiled and Broke (2020).

The gorgeous daughter of Curtis, Leilani Conway, is twenty-one years this year. Curtis’ ex-spouse Leoria delivered her on 16 February 1999. She graduated her high school from Chandler High School in 2017, where she was a student-athlete.

Curtis Conway’s daughter, Leilani, is a gorgeous girl with a flaunting body. She does modeling for various modeling agencies, Fashion Boutiques, and Cosmetics, including Aradi Boutique. Moreover, according to Leilani’s Instagram page, she is an entrepreneur. She has some business in Beverly Hills.

Curtis Muhammad Conway Jr. was born on 26 August 2008, weighing 6.8 lbs and measuring nineteen inches long at the time of his birth. CJ is the first child of Laila and Curtis together after their marriage. Also, he is the first grandchild of Laila’s late father, the boxing champion, Muhammad Ali.

Like the middle initial in Curtis Jr.’s name, he looks like the reincarnation of his grandpa Muhammad Ali. His parents also expect that CJ will be an athlete one day, like his mom, dad, and granddad. However, Curtis Jr. is too young to chose his career path. For now, he is in school and enjoys playing baseball with his friends and siblings.

The Youngest of All: Sydney J. Conway

Here comes the youngest and most pampered child of Curtis with former boxing champion spouse Laila, Sydney Jurldine Conway. Fitness Advocate Laila and Sports analyst Curtis welcomed their new rug rat Sydney on 4 April 2011. And, her parents had decided her name Sydney which means ‘wide meadow’ before her birth. Also, they gave her the middle name ‘Jurldine’ in memory of Curtis’ late granny Jurldine Conway.

Sydney graduated from Kindergarten back in 2017. Curtis shared his baby girl’s graduation along with a string of pictures on his Instagram page. As per her Kindergarten graduation year, Sydney must be in her elementary school this year, and she loves playing baseball.

All the five kids of Curtis have a great bonding with each other. Energetic Home Chef Laila takes full care of her bonus, three children, along with her own two. Conway family organize small parties often so that they can meet their family members and children together. The happy family lives in Woodland Hills, California.

Now, we hope we succeed to give maximum information about all five of Curtis Conway’s children.