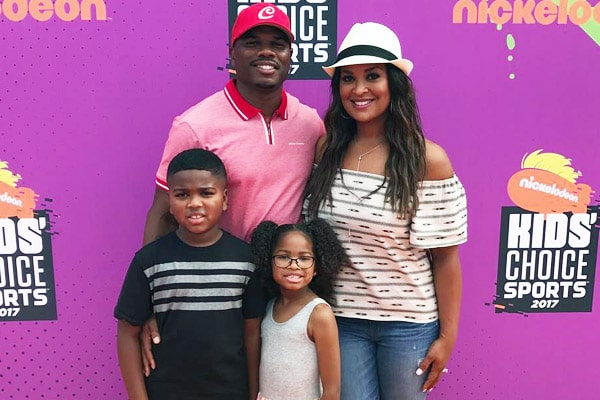 Laila Ali is famous for being a four-time undefeated boxing world champion rather than being Late Muhammad Ali’s daughter. She is also a fitness and wellness advocate, plus the founder of the Laila Ali Lifestyle brand. After getting married to former NFL wide receiver Curtis Conway, she became a mother of two, a son Curtis Muhammad Conway Jr. and a daughter Sydney J. Conway.

Besides the professional life of Laila Ali, there is so much you need to know about her personal life too. Thus, here in this article, we are about to give away some information about Laila Ali’s daughter Sydney. Don’t miss it out.

The regular panelist for the CBS Sports Laila welcomed her daughter Sydney with husband Curtis, on 4 April 2011 at 3 am. She became the second child and the youngest one of Laila with her beloved partner Curtis. As we have mentioned earlier, Laila and Curtis also have a son named Curtis Muhammad Conway Jr. together, who is two years older than Sydney.

Sydney’s momma Laila was so excited about the arrival of her daughter. She had announced that she was having a girl on her very own blog three months before Sydney’s birth.

Moreover, the parents of Sydney had decided her name before her arrival. Laila Ali’s daughter Sydney got her middle initial ‘Jurldine’ in honor of Curtis’ grandma Jurldine. Also, Laila had bought little outfits for her princess in advance.

Aside from Sydney, Laila and Curtis have one more kid together, Curtis Jr. Sydney’s brother, Junior Curtis, was born on 26 August 2008, making Laila’s father Muhammad Ali a proud granddad for the first time. Laila and her spouse Curtis often share Sydney and her brother’s photos often on their social media pages.

Not only Kelton but Sydney’s half-sister Leilani is also a player. She is a student-athlete in Chandler High School. Talking about Sydney’s other half-brother Cameron, he is a graduate of Los Angeles Pierce College. Cameron was also a football player in his alma mater.

Her Parents Met In A Small Party

The happy parents of Sydney, Laila, and Curtis, met in a small party hosted by Laila in Curtis’ home. Conway proposed the gorgeous mom of Sydney, Laila, on Thanksgiving Day of 2006. The duo married later in July 2007, four months after the retirement of Laila from boxing.

Marriage With Curtis Is Second Of Sydney’s Mother Laila

Sydney’s mom Laila Ali wed twice in her lifetime. Before tieing a marital knot with Curtis Conway, Laila was in a conjugal relationship with Johnny’ Yahya’ McClain from 2000 to 2005. Laila met Johnny through her sister at her father Muhammad’s 57th birthday party.

Johnny McClain was Laila’s manager and assisted Laila in her boxing career. After the divorce in 2005, the former boxer McClain, stopped managing Ali, and Eric Kaufman took the post as her manager. The two, Laila and Johnny did not have children together.

And let us tell you all, you do not need to worry about photos of Laila Ali’s daughter, Sydney, as her parents post her pictures often in their respective Instagram accounts.