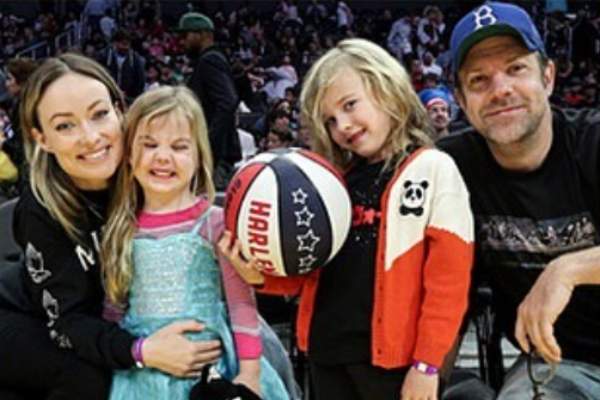 Daniel Jason Sudeikis, famously known as Jason Sudeikis, is an American actor, comedian, producer, and writer. He started his comedy career in the 1990s, working with Comedy Sportz, Improv Olympic Chicago, and The Second City. From 2003 through 2013, Sudeikis also worked as a cast member and writer for Saturday Night Live, portraying characters such as Mitt Romney and Joe Biden.

The outstanding actor Jason has two kids with his former partner Olivia Wilde, an actress and screenwriter. So, now follow along and learn more about Jason Sudeikis’s children, Daisy Josephine Sudeikis and Otis Sudeikis.

Daisy Josephine Sudeikis was born on 11th October 2016 in LA, Califonia, USA as the second child of her parents. Josephine’s mother, Olivia, announced her birth through a post on Instagram. Her mama announced her upcoming arrival in April 2016 through an Instagram post. Furthermore, Jason Sudeikis’ baby girl is said to be born on a great day, as October 11 is International Girls’ day.

The father and daughter duo have the same initials, as Jason’s first name is Daniel. Additionally, she is named after her mom’s cousin named, Daisy, and her middle name was kept Josephine because her paternal granddad and great-great-grandfather were named Joseph, and her mom’s great-grandmother was named Josephine.

The Hollywood star’s daughter, who is just six years old as of 2022, has already made her acting debut in the movie Don’t Worry Darling. Like her, Olivia Wilde’s ex-beau often gets candid about their baby girl. For instance, Daisy Sudeikis‘ dad expressed that she seems to have inherited his comedic timing.

Olivia said that when Daisy was 18 months old, she was a total hambone and would do anything for a laugh. Even when it was time to drop her off at school, Olivia Wilde’s daughter would act like she had fallen asleep. So, what will be the main forte of the star’s daughter? Acting or comedy?

Daisy has an older brother named Otis Alexander Sudeikis. Their parents welcomed him on April 20, 2014. Otis Sudeikis‘ mom shared the happy news of his arrival on Twitter. Furthermore, Jason Sudeikis’ son’s name is inspired by Otis Redding, the American singer-songwriter whom Olivia adores.

While it is too soon to know if junior Sudeikis will pursue acting, Olivia once revealed that he loves singing. Olivia Wilde’s son loves Moana and thinks of himself as Moana. He became a huge fan of Beyonce ever since he discovered her songs on his mother’s iPad. In The Late Late Show With James Corden, Jason states that his son loves watching Star Wars with him.

Having just two years of the age gap, Jason Sudeikis’ children must have very precious memories and a beautiful bond. Apart from singing and Star Wars, Jason Sudeikis’ son also has a passion for basketball, which he encouraged by placing a mini hoop in his room. So, what will Otis follow in the future? Only time will tell.

Read More: Did You Know Classical Pianist Martha Argerich Is A Mother Of Three Daughters

Daisy And Otis’s Parents Are Separated

The Sudeikis siblings’ parents met in 2011 while attending the after-party of Saturday Night Live on the occasion of its 36th season finale. The former couple started their romantic relationship six months after dating and dated for two years. Otis and Dasiy’s father proposed to their mother in January 2013. However, the ex-pair never married.

After the couple had been engaged for almost seven years, the parents of two decided to call it quits. Despite the separation, Olivia Wilde’s kids are their primary concerns. They are still good friends, and co-parenting them. The babies are the priority, and the estranged duo has transitioned into a great co-parenting routine.

Additionally, Otis and Daisy’s mom reportedly had a relationship with the famous singer and songwriter Harry Styles since January 2021. Their dad dated Keeley Hazell for less than a year.

Nonetheless, Jason Sudeikis’ children with Olivia must be raised with immense love and care. Hopefully, both of them will become successful individuals in the future. Our best wishes are with them.

The name Daisy is taken from Old English, meaning the day’s eye. The name Josephine is primarily feminine, meaning Yahweh shall grow.

Otis, the Son of Ode, is primarily of English origin. Alexander means defender of men and has derived from Latinized form of the Greek name Alexandros.