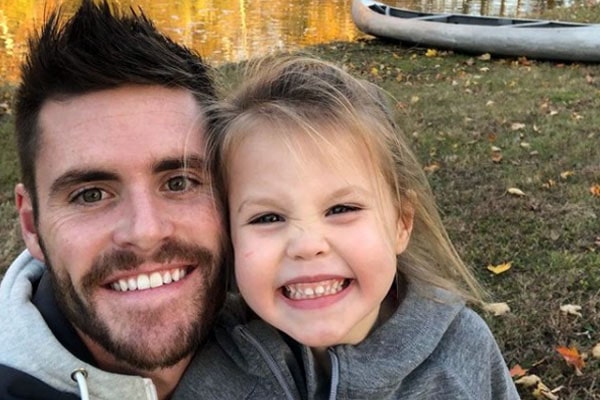 Dakoda Boudia is the daughter of the American diver, David Boudia, with his long-time wife, Sonnie Brand. Recently, her famous dad, David, finished third at the U.S. Diving Trials but sadly missed out on being qualified for the 2020 Tokyo Olympics. Though he did not make it to his third Olympics, Boudia is still a role model to millions of athletics fans worldwide.

While David Boudia is winning the hearts of millions of people worldwide, his fans are curious to be familiar with his personal life, including his daughter. So, here, find out some interesting facts on David Boudia’s daughter, Dakoda Boudia, whom David lovingly calls Koda.

As hinted above, Dakoda Boudia is the eldest child of the notorious Olympic champion diver, David Boudia, with his wife, Sonnie Brand. The beautiful pair, David and Sonnie, exchanged their wedding vows in 2012, after the London Olympics.

Two years later, their sweet little girl, Dakoda, arrived on 10 September 2014, making them proud parents for the first time. Baby Dakoda weighed in at 7.6 lbs and measured 20 3/4 inches at the time of her arrival.

David Boudia’s daughter, Dakoda Boudia, has two younger siblings, a sister named Mila Primm Boudia and a brother, Knox Boudia. Dakoda became a big sister for the first time on 24 August 2017, with the arrival of her baby sister, Mila Primm. Similarly, her second sibling Knox joined the family on 22 April 2019.

According to sources, Dakoda Boudia is soon to be the sister of one more upcoming member of her family. As her overwhelmed father, David, recently announced via his Instagram page, her family’s baby no. 4 is on the way. Along with David and Sonnie, Dakoda and her siblings are also eagerly waiting for the arrival of the new member of their family.

Has David Boudia’s Daughter Any Interest In Swimming?

Being a daughter of a world champion diver, David Boudia’s daughter, Dakoda Boudia, also often gets to go swimming with her pro-dad and learn some tricks with him. Seeing the photos of Dakoda going swimming with her family, it looks like she also shows some interest in it.

However, as Dakoda is too young at the moment, we have to wait for a while to find out if she also will follow in her dad’s footsteps as a diver.

Besides swimming, Dakoda is a keen music lover since her early toddler years. Whenever her favorite song plays at her home, she loves to sing along and dance to the beats.

Moreover, the daring cute Dakoda enjoys going on outings with her parents and siblings. We can often see the Boudia family spending quality family time together, going to parks for a family picnic, enjoying foreign tours, and many more.

Dakoda Boudia Is Her Dad’s Motivator

Behind many successful people, there is a hand of their family members or someone close to their heart. For David, his daughter, Dakoda, is his biggest motivator and stimulator, who never lets him lose his hope in his ability.

While talking to Newsday, David Boudia revealed that he considered leaving the sport before the arrival of Dakoda in his life. However, after her birth, she encouraged David to get back into sports, even if she does not know it.

The doting dad of Dakoda, David, said that before Dakoda came into his life, he was quite apprehensive and a little bit tired of doing what he was doing. But, Dakoda’s birth brought that fire back into his life, knowing that he has a little girl that’s looking up to him.

So, in this way, David Boudia’s daughter, Dakoda Boudia, is her dad’s stimulus, who inspires him to keep moving in his life.

For now, Dakoda Boudia lives a peaceful life with her family in Indiana. We hope to hear and see more of her in the days to come and hope she will grow up to be as successful as her dad in the future.