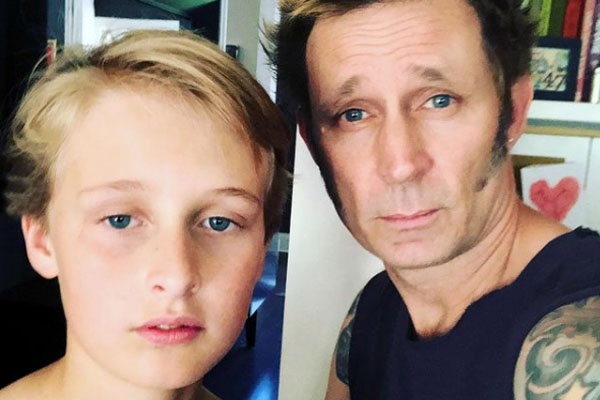 Mike Dirnt is a famous American bassist, musician, and singer, best known for being the co-founder and bassist of the rock band Green Day. Besides being a successful member of the American music industry, Mike Dirnt is also a doting dad to three kids, including son Brixton Michael Pritchard, whom he welcomed with his wife, Brittney Cade.

Here, let’s find out more about the energetic and lively musician Mike Dirnt’s son, Brixton Michael, and how he is growing up.

Born A Year Before His Parents’ Marriage

But, Brixton had joined the family earlier than that on 11 October 2008. So, he was present at his mom and dad’s wedding day.

As noted by the People magazine, Brixton Michael arrived in 2008 weighing in at 8 lbs. At the time of his arrival, his dad was working in the studio with his band, Green Day, in preparation for their album titled 21st Century Breakdown.

Brixton Michael is the first child of Mike Dirnt with his current wife, Brittney Cade. The pair has one more child, a daughter named Ryan Ruby Mae Pritchard, younger than Brixton. Similarly, Mike has one more daughter, Estelle Desiree Pritchard, from his previous relationship.

As mentioned above, Brixton Michael is the only son of Mike Dirnt and Brittney Cade. He has a younger sister, Ryan Ruby Mae, who joined him on 29 November 2010. Similarly, Brixton has an elder half-sister, Estelle Desiree, born on 20 December 1996, to Mike Dirnt and his then-wife, Anastasia Serman.

Ever since Dirnt won full custody of Estelle in 2008, Estelle also lives with Brixton and his family in Oakland.

Brixton Michael’s parents often share photos of him with his siblings on their respective social media handles. Going through the pictures, people can see that he shares a great bond with both of his beautiful sisters.

Moreover, we also can often see snaps of Brixton with his sisters on his elder sister Estelle’s Instagram page. We hope we will get to see their relationship getting stronger with each passing day.

Like many other notorious personalities worldwide, Mike Dirnt also usually keeps his kids’ personal details far from the reach of media scrutiny. However, he does not stop them from accompanying him on his musical tours with his band around different parts of the world. Dirnt’s fans can often spot his son, Brixton accompanying him on stage during various musical tours.

Besides accompanying his father on musical tours, Brixton Michael also visits his father’s workplace/studio with his mom during his free time. Seeing Brixton’s love for his dad’s profession, we can assume that he also dreams of being like his celebrity dad in his future. So probably, we might get to see and hear about another Pritchard ruling the world of music shortly.

But, for now, Brixton Michael is too young to decide about his career path. Currently, he is enjoying his early teenage years and focuses on his studies. We hope the younger version of Mike Dirnt, Brixton, also will grow up to be as successful as his dad in the upcoming days.

The boy’s name Brixton originated from Brixistane, which means the stone of Brixi, a Saxon lord.