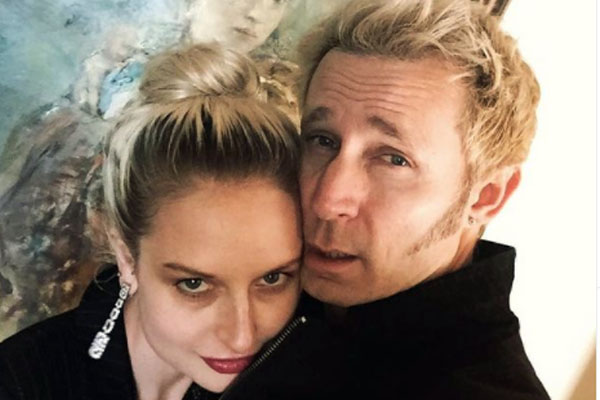 Brittney Cade and Mike Dirnt are together as husband and wife since 2009. Image Source: Brittney Cade's Instagram.

Mike Dirnt is not an unfamiliar face in the world of music. The American musician, and singer, Dirnt is best recognized as the rock band Green Day‘s bassist and one of its founding members. Besides being a famed musician, Dirnt is also a dedicated husband and a dad. He is in a marital relationship with beautiful Brittney Cade since 2009.

So, who is Mike Dirnt’s wife, Brittney Cade? Find it out here along with their marital life and their children together.

Brittney Cade met the love of her life, Mike Dirnt while serving as a waitress at the chic Japanese restaurant Sushi Roki in L.A. in early 2004. Reportedly, Mike Dirnt was there for dinner. After meeting each other at the restaurant, Dirnt and Cade built a friendly relationship. They remained friends for almost a year and a half before Mike gathered the courage to ask Brittney out for dinner.

A couple of months after Brittney and Mike Dirnt began dating; they went on a backpacking trip through Europe in October 2007. During the trip, the romantic pair spent a while in Venice.

While they were in Venice having a quality time together, Dirnt suddenly got nervous. He pulled out an ‘I’m Forever Yours’ inscribed rose gold ring and proposed Cade to be his wife. Mike even got the whole thing on tape with the help of a video camera rigged onto a nearby dock.

Brittney Cade and Mike Dirnt exchanged their wedding vows two years after their engagement in 2009.

As mentioned above, Mike Dirnt asked his then-girlfriend, Brittney Cade, to be his wife during a trip to Venice. They waited two years to tie their marital knot. According to reports, Mike Dirnt married Brittney Cade on 14 March 2009 at Ojai Valley Inn & Spa in Ojai, California.

Mike Dirnt and Brittney Cade’s wedding ceremony was all arranged by L.A. planner and the couple’s friend, Tony Schubert of Event Eleven, in just 45 days. The reception tables on their big day were decorated with clusters of green succulents and white hydrangea.

Moreover, the then-newly wed pair, Mike and Brittney, had napkins printed with their names and wedding date as a keepsake of their special day.

Furthermore, Mike Dirnt’s marriage with Brittney Cade is his third marriage. Before Cade, he married and divorced two women; Anastasia Serman and Sarah Garrity. However, it seems like it’s the first for Brittney Cade as there are no records of her being in a marital relationship with any man before Dirnt.

Mike Dirnt’s wife, Brittney Cade, is a proud momma to two adorable kids with him. Together, they have a son named Brixton Michael Pritchard and a daughter, Ryan Ruby Mae Pritchard. Cade welcomed her first child with Dirnt, Brixton Michael, a year before their wedding, on 11 October 2008. He weighed in at 8 lbs. at the time of his birth.

Similarly, Brittney gave birth to her second child with Mike, Ryan Ruby Mae, on 29 November 2010. She arrived weighing in at 7.6 lbs. The birth of their little girl was announced on Mike Dirnt’s band, Green Day’s website.

Moreover, Brittney Cade is also a loving and caring step-mom to her husband’s daughter from his previous marriage, Estelle Desiree Pritchard. She shares a great bond with her step-daughter, Estelle, and often posts her pictures on her social media pages.

Mike Dirnt’s wife, Brittney Cade, is a breast cancer survivor and currently shares her story to help other cancer patients. Cade was diagnosed with breast cancer in 2014. But, luckily, she overcame it completely after some months.

Brittney is thankful for her man, Mike’s constant support and encouragement during and after her battle against the illness. However, the news of his life partner’s fatal illness had devastated Dirnt, and he was suddenly faced with keeping his family together.

Moreover, there was also the heartache of having to help their two little kids, Ryan Ruby and Brixton, through the ordeal. It was tough, especially on their youngest child, Ryan. However, Brittney and her husband, Mike, never lose their hope.

The couple decided to treat each day as it came and be strong for their children. According to Cade and Dirnt, Tower Oncology played a vital role in helping Dirnt and Cade process the heavy news and devise the best course of action. They had thirteen doctors look at Brittney’s case just like they do with any other cancer patient.

As documented by Brittney Cade and Mike Dirnt on their respective Instagram pages some years back, Brittney went through chemotherapy, nine grueling surgeries, and endless appointments to kick the disease. After being free from cancer, she has become a go-to for other cancer patients who want encouragement and advice through her social networking handles.

Also, Brittney and Mike now invest in companies and organizations that focus on helping cancer patients.

Co-Founder Of A Couple Of Clothing Companies

Mike Dirnt’s wife, Brittney Cade’s Instagram bio, suggests that she is a co-founder of two clothing brands, including Simone Kidd and RUE Ltd. She founded both of her clothing companies in collaboration with her fellow fashion designer, Joey Tierney.

Cade and Tierney’s streetwear company, RUE Ltd., is a partner of Orangewood Foundation, a non-profit which offers guidance and resources to prepare community youth and foster to reach their greatest potential.

So, for now, Brittney Cade is a dedicated wife, a doting mom to two kids, an advocate in the fight against breast cancer, and a successful fashion designer. We hope to see and hear more of Cade in the days to come.