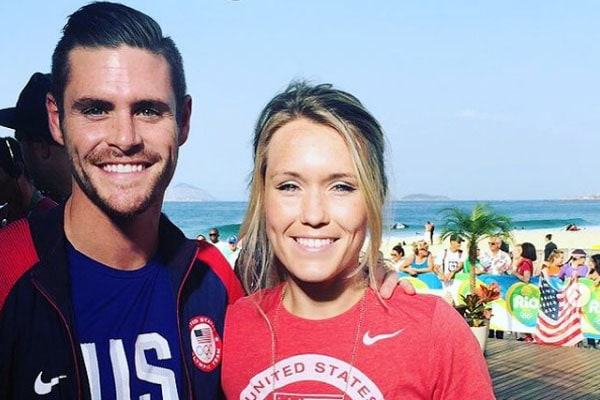 The Olympic diver, David Boudia, is one of the most loved athletes in the United States. Those who have happened to catch any of Boudia’s diving at the Olympics and World Championships thus far might have surely noticed his wife, Sonnie Brand. She attends every of her husband’s games and cheers him on from the stands.

But outside of being an incredibly supportive wife, who is David Boudia’s wife, Sonnie Brand. Well, let’s find it out here.

Married To David Boudia Since 2012

Sonnie Brand exchanged her wedding vows with the Olympic champion athlete David Boudia in October 2012, after dating for a couple of years. Reportedly, the current pair, David and Sonnie, met while both were enrolled at Purdue University. They dated for some years till they got engaged a few months before the 2012 London Olympics.

In his interview with Team USA in 2014, Sonnie Brand’s husband, David Boudia, revealed the humorous story of how he proposed Brand for marriage. As per Boudia, he popped the question in May 2012 during a game with their family and friends, which they call succotash. It is a mix of Catch Phrases, charades, one-word guesses, and so on.

Happy Valentines day to my amazing husband @davidboudia ! Thanking God for you more and more every day. 🙂 pic.twitter.com/9X9Uzact7h

Further explaining, Boudia said that while playing the game, he decided to put the word engagement as one of the Catch Phrases in the game. The moment they started playing the first round, Sonnie guessed engagement right away.

Then in the second round, Boudia tried to make a silly gesture that would not represent ‘engagement,’ but Brand guessed it right away.

It took David Boudia a while to finally get the courage to propose Brand. And, undoubtedly, Brand said a big ‘YES’ when Boudia did. The pair tied their marital knot after the London Olympics and are happily rejoicing their marital life ever since.

Sonnie And David Broke Up Twice While They Were Dating

In 2016, David Boudia released his autobiography, Greater Than Gold, which he wrote with Tom Ellsworth. The book covers the diving champion’s personal struggles and his relationship with his beautiful wife, Sonnie Brand. As Boudia mentioned in the book, he broke up twice with his then-girlfriend, Brand, while dating.

Though Boudia revealed many personal details in his autobiography, his partner, Sonnie, was not upset about it. While talking to Indy Star, Brand said that she think honesty is always best. She added that she appreciates her husband’s vulnerability. Also, Brand explained that they are also like everyone, and they have things they are working through.

Furthermore, David Boudia’s wife, Sonnie Brand, told Indy Star that she was inspired by seeing her man’s growth, and she is thankful for that. Boudia surely is a fortunate guy as he got such an understanding and supportive wife.

Mother To Three Kids And One On The Way

Sonnie Brand is a doting mother to three gorgeous children with her loving and caring husband, David Boudia. Together, the blissfully married couple, Sonnie and David, have two daughters, Dakoda Boudia and Mila Primm Boudia, and a son, Knox Boudia.

As recently announced by David Boudia on his Instagram page, he and his spouse, Sonnie, are expecting baby no. 4. He notified his fans that he and Sonnie first heard the heartbeat of their upcoming child two days after the end of the U.S. Olympic Team Trials for Diving in June 2021.

We want to congratulate the whole Boudia family and pray for Sonnie and her baby’s good health.

David Boudia’s Wife Is A RDN

Athlete David Boudia’s wife, Sonnie Boudia, is a Registered Dietitian Nutritionist (RDN). She studied Dietetics/ Nutrition, Fitness, and Health at Purdue University from 2007 to 2012 and has been working as an RDN ever since.

According to Sonnie Brand’s Linkedin page, she serves as a Dietic Intern at Purdue University since August 2011. Besides, she also has experience working as a Dietic Intern at various other institutes and centers in the past. Brand’s former workplaces include St. Francis Weight Loss Center, IU Health North, Purdue University’s Ford Dining Court, and Marion County Health Department.

Before beginning her career as a Dietitian, Sonnie Brand worked as a Room Service Specialist for almost a year at Franciscan St. Elizabeth Health. Her responsibilities at Franciscan included explaining patient ordering systems and diet specifications to patients and stocking and refilling nursing’s kitchen stations.

Hardly Misses Out Her Husband’s Games

David Boudia’s wife, Sonnie Brand, hardly misses out on her champion husband’s games in different parts of the world. She was there when David won a gold medal in the 2012 London Summer Olympics. Also, Sonnie and their first kid, Dakoda was there to cheer David up at Rio 2016 Summer Olympics. Her presence and support give her better half the courage to win several awards and accolades.

When not busy traveling with her husband for his games, Sonnie loves to cook various foods. On top of that, adventurous Brand is keen on outdoor activities. She enjoys going ice-skating, sea surfing, and many more with her family during holidays. Other times she is a stay-at-home mom who manages her home and kids while David goes out for his practice and other works.

Currently, Sonnie Brand lives a joyful life as a dedicated mom, wife, and certified Dietitian. We expect to know more about the beautiful wife of David Boudia in the day to come.