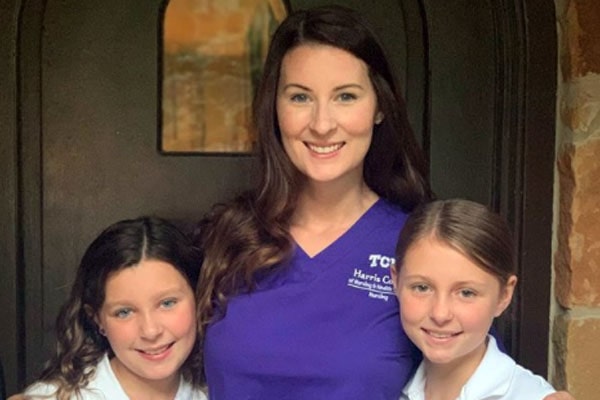 Rebekah Hancock is the beloved wife of the American shooter and Olympic athlete Vincent Hancock. She is in a marital relationship with the Florida-born athlete since May 2008. After Vincent won his third Olympics gold medal in Men’s Skeet Shooting in 2020, his fans are eager to know more about him, including his beautiful wife, Rebekah Hancock.

Married To Vincent Hancock Since 2008

Rebekah Hancock reportedly exchanged wedding vows with Vincent Hancock on 31 May 2008. The secretive couple, Rebekah, and her famous husband, Vincent, have not revealed any details on their marriage day.

However, according to sources, both were only 18 years old when they exchanged their wedding vows.

Furthermore, Rebekah Hancock, also a competitive shooter, met the love of her life, Vincent Hancock as a teenager. So, probably the current husband-wife duo might have met while both were in some shooting competition. And possibly after meeting in some tournament, both Rebekah and Vincent got attracted to each other and started dating.

Reportedly, Vincent Hancock’s wife, Rebekah Hancock, lived a few hours away from him. So, it made them easier to meet each other often and strengthen their relationship. They hung out together for a couple of months and eventually married at the age of 18 in 2008.

The decade-long blissful marital life of Rebekah Hancock and Vincent Hancock did not just give them shoulders to lean on but also made them parents to two adorable kids. Together, the married couple is parents to two daughters, Bailey Hancock and Brenlyn Hancock.

For both Vincent and his gorgeous wife, Rebekah, their two children are their main priority. Despite their busy schedule, both of them separate enough quality time to spend with their little ones and make them feel special.

Furthermore, after getting married, Vincent Hancock’s wife, Rebekah Hancock, seems to have paused her studies and career until her daughters grow up. It’s because she joined a nursing school just a year ago and is still waiting to complete her nursing course.

As hinted above, Vincent Hancock’s wife, Rebekah Hancock, is a nursing student. She currently studies at TCU Nursing, Harris College of Nursing & Health Sciences. As mentioned by Rebekah in one of her Instagram posts, her first day at TCU was in August 2020 and waiting for her graduation at the end of 2021.

Furthermore, while not busy with her studies and other jobs, Rebekah Hancock loves to spend her time with her close friends and family. She often shares photos on her Instagram page having fun with her daughters and friends during her holidays.

On top of that, the dedicated wife of Vincent frequently attends her husband’s games. Also, she visits him with their kids while he practices at his shooting range.

Some people say that a man’s success is made possible by the support and work of their wife or female partner. In the case of Vincent Hancock, his wife, Rebekah, is his biggest supporter and motivator. She never let him feel down or lose his love for the sport.

In 2011, Rebekah’s husband, Vincent Hancock, was so unhappy with skeet shooting that he almost gave up. Despite winning a gold medal in skeet shooting in the 2008 Olympics in Beijing, he had lost his affinity for the sport.

After his worst finish ever in the World Cup competition in Slovenia, Vincent called Rebekah to tell her that he wanted to give up.

But, Rebekah told her husband not to quit. Instead, she told him to get back home and talk and pray about it. Without any comments, Vincent followed his spouse’s counsel. After getting back home, both of them talked through the challenges Vincent was facing and prayed together every night.

As a result, Mr. Hancock began seeing some improvements in his shooting, and to everyone’s surprise, he became a gold medalist in the 2012 Summer Olympics in London.

So, though Vincent Hancock lost his hope in his ability in the past, his supportive wife, Rebekah Hancock, never lost her trust in him. She renewed her man’s perspective on his sport which he still carries with him.

Vincent must be proud that he got Rebekah as his life partner and mother to his kids. We hope the pair’s love and trust for each other remain as strong as it is now till eternity.