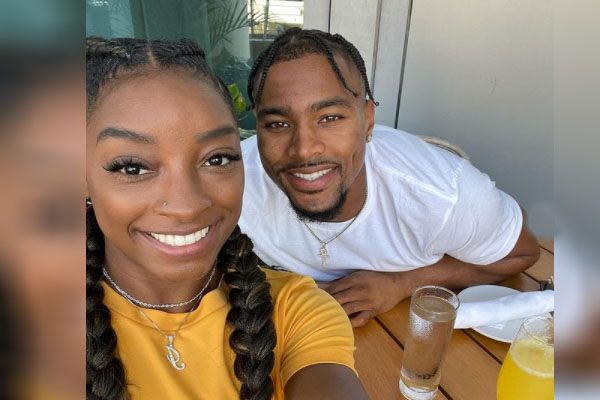 Simone Biles and Jonathan Owens are officially in a romantic relationship since the mid-2020. Image Source: Simone Biles' Instagram.

Jonathan Owens is the current boyfriend of the four-times Olympic gold medalist, Simone Biles, who recently won the seventh U.S. all-around championship. The most decorated American gymnast, Biles, started dating Owens in the mid-2020, and ever since then, they are enjoying their romantic life in the public eyes.

So, who is Simone Biles’ boyfriend, Jonathan Owens, and what does he do now? Find it out all here, including the pair’s love life and relationship.

After signing to the Houston Texans’ practice squad, Jonathan Owens signed a reserve and future contract with the same team in January 2020. Texans signed him to the active roster only in December 2020. The 5’11 tall Owens’ jersey number for his current team is #36.

Furthermore, before joining the NFL, Jonathan Owens was a college football player at Missouri Western State University. He was even honored as MWSU Male Student-Athlete of the Year during his final season in 2017.

Though Jonathan Owens is gradually finding success as an NFL player at the moment, his dream was to become a doctor. He has done major in pre-physical therapy at Missouri Western State University.

So, chances are Owens might pursue a career in the medical field in his future. But, for now, he is doing great as a professional football player.

Jonathan Didn’t Know Who Simone Was At Their First Meet

Simone Biles’ boyfriend, Jonathan Owens, met his future girlfriend on social media amidst the COVID-19 pandemic in March 2020. While talking to the Texas Monthly magazine, Owens revealed that he did not recognize Biles from her iconic Instagram at first. Jonathan said that he had not heard of her, and when he told her the truth, that’s one of the things Biles liked of him.

Furthermore, according to Owens, his current love, Biles, impressed him via an episode of Simone vs. Herself. The very first thing that caught his eyes was Biles’ work ethic. Owen never watched gymnastics before he first began talking to her. He told the Texas Monthly magazine that he honestly did not know who Biles was.

But when he saw millions of followers on Biles’ Instagram, he just thought that she must be quite good or something.

But now, Owens knows his girl well, and he is one of her biggest fans. He is very supportive of Biles’ career and always encourages her to move forward. On top of that, Owens is always helpful and makes sure Biles stays on top of her therapy. He even got the chance to cheer his girl in person as she came first in the seventh U.S. national women’s championship.

In return, Biles is also supportive of her boyfriend, Owens’ football career. She often attends Owens’ football games and even shares pictures of herself wearing Houston, Texas, printed one-piece on her Instagram. We hope the pair’s love and care for one another will stay the same till eternity.

In early 2020, both Biles and Owens had their own big plans, with Biles expected to compete in the Summer Olympics and Owens headed to his training camp. However, due to the pandemic, everything got postponed. So, the pair got more time to spend with each other.

According to Simone Biles’ boyfriend, Jonathan Owens, he and Biles started hanging out right before the pandemic. It was one of the few times in Biles’ life where everything was just shut off, and she was not up to anything. So, the new romantic couple used it to be close to and know each other. It created their bond and strengthened it.

Furthermore, various similarities between Owen and Biles also helped them to be closer. According to Biles, she and Owens vibe on the same level, have the same kind of humor, and the main thing is both of them are in sports.

So, both Owens and Biles think that their match was made in heaven. Owens feels fortunate to have Biles, who is loving, affectionate, and full of positive vibes, in his life.

Both Simone And Jonathan Are Caring Pup Parents

Jonathan Owens mentions himself as a dog dad to his now-two-year-old bulldog, whom he calls Zeus. He even runs his little fur baby’s Instagram page, @zeusthebulldog36. According to Zeus’ Instagram bio, he is an energetic English Bulldog, and he loves food, chewing on anything he can find, and taking long naps.

Also, his bio reads that he is a son to Jonathan and an inspiring model.

Similarly, Jonathan’s girlfriend, Simone, also runs an Instagram account for Lilo and Rambo, her own French bulldogs. The current trending cute couple, Owens and Biles’ fur babies, have even made one another’s Insta walls. Their captions refer to each other as siblings.

So, Simone Biles and her boyfriend, Jonathan Owens, are very much in love with each other at the moment. Seeing their love chemistry, it seems like soon we will get to see the duo tied in a marital knot and being parents to human babies.