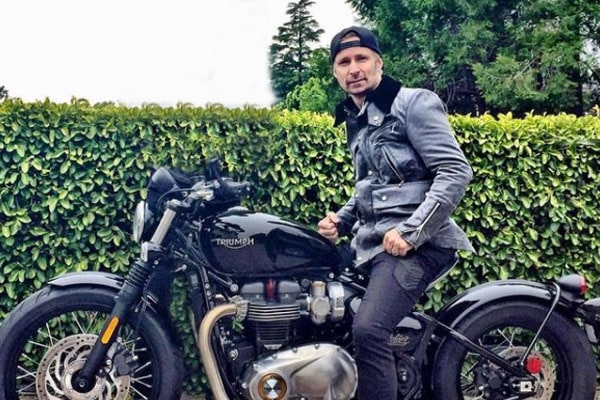 Mike Dirnt draws in millions from his career as a famed musician to afford expensive bikes and other luxuries. Image Source: Mike Dirnt's Instagram.

Mike Dirnt, born Michael Ryan Pritchard, is best known as the American rock band, Green Day‘s bassist, and one of its founding members. Along with his band members, Billie Joe Armstrong and Tre Cool, he is winning the hearts of millions with their performance since the late 1980s. Along with fame and love from their fans, the trio has made millions of dollars, which is increasing with their rising stardom.

But, here, we will be tailing especially about the Green Day band’s bassist, Mike Dirnt’s net worth, and how he manages to deposit millions to his bank account. So, stick with us till the end of this article to find it out.

Mike Dirnt Net Worth And Earnings

One of the founding members of the rock band Green Day, Mike Dirnt is actively contributing to the world of music since the late 1980s. Through the years, Dirnt, with his bandmates, has sold millions of records and has performed in the biggest music venues worldwide. It has directly helped him to deposit a considerable sum into his bank account.

According to Celebrity Net Worth, Mike Dirnt’s net worth is estimated to be $50 million. So, let’s take a closer look and see how Dirnt manages to add such a hefty amount to his net value. Also, find out what are Mike Dirnt’s other earning sources, contributing him to be a multi-millionaire.

As mentioned above, Mike Dirnt is actively serving in the music industry since he formed the rock band Green Day, with his friend, Billie Joe Armstrong, in the late 1980s. In the beginning, Dirnt played rhythm guitar. But after his band’s former bass player Sean Hughes left, he started to play bass.

Since then, Dirnt has been continuously serving as Green Day‘s bassist and occasional vocalist and songwriter.

So, Mike Dirnt might have received an impressive paycheck as his share from the sales of his albums with the rock band Green Day. Besides, he also draws in a big sum of money from the ticket sales of his musical tours with his band in different parts of the United States and other countries.

Income From Other Endeavours

Besides being a bassist, and casual singer-songwriter of Green Day, Mike Dirnt has also worked with various other bands. He played bass guitar and did backing vocals for a couple of albums of the bands, including Foxboro Hot Tubs, The Network, The Frustrators, Squirtgun, and Screeching Weasel.

Furthermore, Mike Dirnt has also appeared in several TV sitcoms, video games, and films in the past, which have helped him add some dollars to his rising net worth.

Some of the films in which Dirnt appeared along with their box office collection are presented below.

So, some portion of Mike Dirnt’s earnings for his net worth goes to his other media appearances as well.

Earnings From Sales Of His Merchandise

Some percentage of Mike Dirnt’s net worth’s credit goes to his earning from the sales of his merchandise available in various stores worldwide. He receives a comprehensive portion from the sellers after the deduction of the taxes and credit card fees.

Some of Mike Dirnt’s merch available on various online sources and stores, along with their price, are as below.

So looking at all these earning sources, it is no wonder that Mike Dirnt’s fortune is in multi-millions.

Mike Dirnt’s House And Other Assets

The successful musician Mike Dirnt’s net worth has provided him with all the luxuries and rich life he deserves for his hard work. Currently, he lives in a luxurious mansion with his wife, Brittney Cade, and their kids, Brixton Michael Pritchard and Ryan Ruby Mae Pritchard, in Oakland.

Moreover, he rides in comfy cars and bikes, including Triumph’s Bonneville Speedmaster, which has a starting price of $13,150.

New Mexico was a rockin tonight!

Furthermore, Mike Dirnt also had increment to his bank balance by selling some of his assets in the past. For example, in 2017, he sold his 1,186-square-feet quirky beachfront residence in the tony seaside community of Montecito in California for $4,050,000, which he had purchased in 2014, paying $3,350,000.

Similarly, he also received $3,600,000 after selling his 2,500-square-foot Cape Cod-style, ocean-view house near the sand in Newport Beach the same year.

So, Mike Dirnt brings in millions of dollars to enjoy a sumptuous life and give back to the community. Hopefully, he has not forgotten to insure all of his valuables and to pay taxes in time. We wish the legendary bassist all the best for more success and fortune in his life.