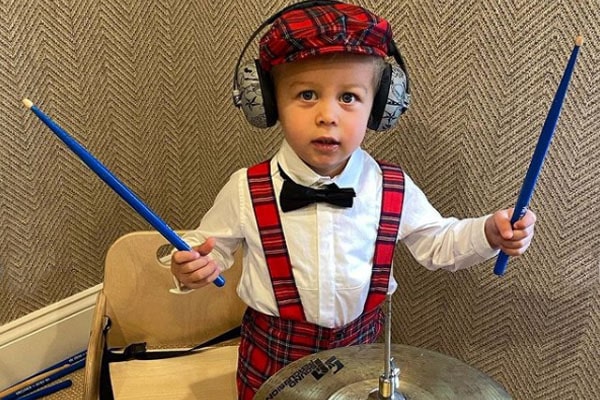 Mickey Otis Wright is the son of the famous American musician and singer Tre Cool. Born Frank Edwin Wright III, Tre welcomed his son, Mickey, with his beloved wife, Sara Rose Lipert, whom he married in 2014.

Mickey Otis Wright is the first child of the Green Day’s drummer, Tre Cool, with his spouse, Sara Rose Lipert. Tre Cool and Sara welcomed their baby boy, Mickey Otis, on 27 December 2018. He weighed in at 7.10 lbs at the time of his arrival.

The proud dad, Tre Cool, shared the good news of his little boy’s birth via his Instagram page. He posted a snapshot of him and his wife, Sara, holding his newborn. He captioned the picture revealing the name, date of birth, and weight of their little one.

Moreover, the overwhelmed parents of Mickey, Sara, and Tre Cool, had announced the news of them heading towards parenthood by sharing a video on their Instagram. In the video, Tre Cool and Sara appeared in a black-and-white video holding a series of signs. Later, both of them eventually pulled back signs revealing they were having a baby.

As mentioned above, Mickey Otis Wright’s parents, Tre Cool and Sara Rose Wright took their wedding vows in 2014. However, this is not the first marriage of Tre Cool. Before marrying Sara Rose, he married and divorced twice and was blessed with a child from each marriage.

Tre Cool’s son, Mickey Otis Wright, has two elder siblings from his father’s previous marriages. He has a half-sister named Ramona Isabel Wright, whom Tre Cool welcomed with his ex-wife, Lisea Lyons, in 1995. Similarly, Mickey has an elder half-brother, Frankito Wright, from his father’s past marriage with Claudia Wright aka Claudia Sofia Suarez.

Adorable Mickey Otis Wright is close with both of his half-siblings. The Wright siblings can often be seen together on their father’s social networking handles. Recently, with his parents and elder brother, Frankito, Mickey attended his sister Ramona’s wedding ceremony, where he served as ring bearer.

We hope Mickey and his siblings’ love and care for one another remain as strong as it is now till eternity.

Drummer Tre Cool’s youngest kid, Mickey Otis Wright, turned three years old recently. But, the little boy is already showing signs of being a rockstar like his dad. At such a tender age, he shows a keen interest in his father’s profession and tries to play musical instruments, including drums and conga.

Toddler Mickey Otis Wright has his own little drum with his name and birth date written on it. It seems like his parents gifted it to him so that he can learn to play drum early. The little rockstar has even already learned some tricks from his dad.

Besides, the cute son of Tre Cool, Mickey Otis, also shows interest in playing conga. Recently, his father’s friend and a well-known American conguero, Poncho Sanchez, taught him some epic conga techniques, which he enjoyed learning. So it looks like another legendary drummer is in the making in the Wright household.

For now, Mickey Otis Wright is enjoying his early childhood days and learning new things. We hope to hear more of talented Mickey in the days to come.