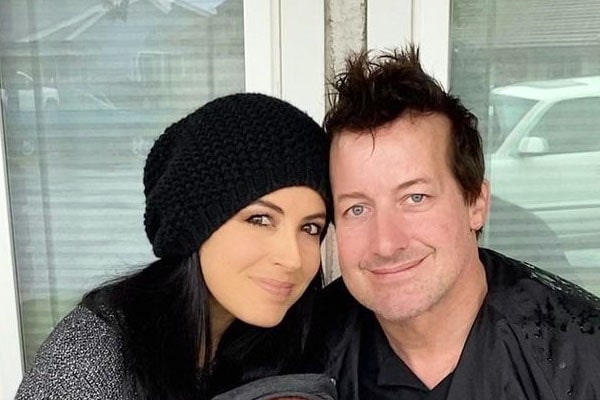 Sara Rose Lipert is best recognized as the wife of the rock band Green day’s drummer, Tre Cool, born Frank Edwin Wright III. The good-together couple is in a marital relationship since late 2014 and is living together happily ever since. We can often see Sara accompanying her husband in various red carpet events and other public events.

Seeing Tre Cool’s wife, Sara Rose Lipert, in various public events and her husband’s social networking handles, many might be wondering what she does at the moment. So, here, let’s find out what Tre Cool’s missus, Sara Rose does. Also, know about their blissful married life.

Musician Tre Cool’s spouse, Sara Rose Lipert, is an aspiring photographer. She mainly captures live music through her lens and the emotions that make it real. You can see Sara Rose Wright‘s photography through her Instagram page, rosewrightphotos. Also, her photography is on sale on Punk Rock PaintBrushes website.

According to Sara’s bio on Puck Rock PaintBrushes, her photography journey started on Valentine’s day, 2017. Her husband gifted her a camera on that day. As they were leaving for a tour, it proved to be a creative outlet for Sara while supporting her husband on the road with his band.

So, on the musical tour with her husband, Sara Rose took photos of everything during the travel, but she enjoyed taking snapshots of the band the most. For a keen music fan, taking pictures of the band and fans allows Sara to capture a glimpse of the experience and share the best experience as best as she can.

As an aspiring photographer, Sara Rose Lipert’s main focus is to capture the moments of emotion, rawness, community, and heart. She usually shoots with a Leica Q and a Sony RX10 for the larger venues when she needs to shoot from a distance. Sara feels fortunate to have the support from her husband’s band Green Day at the beginning of her photography journey.

Besides, Sara Rose is also a female rock singer with a great voice. According to sources, she sang a couple of songs for the Moto Mason Kids Book. Moreover, she is also a member of a punk band, Bubu and The Brood, which looks to be on a hiatus in the present. Also, Sara is a member of the musical band, One Less Zero.

We hope we will get to hear the euphonious sound of Sara through more songs in the upcoming days.

The talented and beautiful wife of Tre Cool, Sara Rose Lipert, is a former Miss Supercross and has been racing motorbikes since her childhood days. Reportedly, a skilled dirt bike rider, Mrs. Wright won the Miss Supercross title in 2008. Though Sara does not seem to have won any titles in the latter days, she still participates in dirt bike racing competitions.

We can often see Tre Cool and his robust wife, Sara Rose, posing with their dirt bikes on their Instagram pages. Sara feels refreshed and happy when she gets to race on her dirt bikes during her vacations and other free times.

Besides being a former Miss Supercross, Tre Cool’s wife, Sara Rose Lipert, also has past experience in modeling. She posed for various professional photographers and magazines in the past. However, she does not seem to be active in modeling in the present.

Married To Tre Cool Since 2014

Sara Rose Lipert exchanged the wedding vows with her love, Tre Cool, on 11 October 2014. Though the complete detail on Tre Cool’s marriage with Sara Rose is not available on the internet, the pair occasionally share photos of their wedding day on their social media pages.

In fact, it was Tre Cool who surprised his fans by posting a photo of his big day for the first time a couple of days after his marriage. Through the same Instagram post, Sara Rose’s spouse, Tre Cool, revealed the exact date of their wedding.

Also, he hinted to his fans that they would be going for a honeymoon soon. But, Tre Cool did not mention where he went for his honeymoon.

The togetherness of Tre Cool and Sara Rose as a husband and wife has crossed over half a decade. Still, both of them are very much in love with one another and do not hesitate to show their affection for one another via their social media posts. Moreover, the arrival of their child has added extra love and closeness to their blissful marital life.

A Doting Mother To A Son With Tre Cool

Sara Rose Lipert is a mother to a son named Mickey Otis Wright, with her beloved husband, Tre Cool. Together, she and Tre Cool welcomed their son, Mickey, on 27 December 2018.

Sara often shares pictures of her adorable little boy on her Instagram, which has over 42K followers.

Sara is close with both of her step-children and loves them like her own kids.

So, currently, Sara Rose Lipert lives a happy life with her loving husband, Tre Cool, and their son, Mickey Otis Wright. While not busy with managing her chores and her son, she loves giving continuity to her photography journey. Hopefully, we will find more about Mrs. Wright and update them to you all shortly.