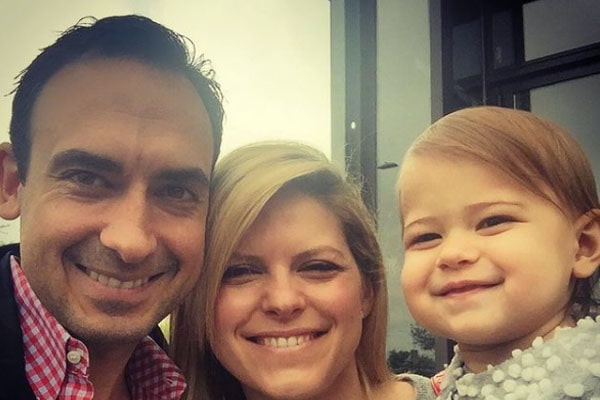 Michael David Gershenson is the long-time husband of the CNN anchor, Kate Bolduan. He has been in a marital relationship with Bolduan since 2010 and is living happily with her ever since, full of support and care. In addition, the presence of their two beautiful girls has added more love and sweetness to their blissful married life.

While beautiful broadcaster Kate Bolduan is finding success in her journalism career, her husband, Michael, is also a successful person in his own profession. He is a part of the U.S. Real Estate team. To know more about Kate Bolduan’s husband, Michael David Gershenson, please stay with us till the end of this article.

A Partner At The Carlyle Group

Kate Bolduan’s spouse, Michael David, is currently a partner at The Carlyle Group, one of the world’s most diversified global investment firms. Focused on U.S. real estate opportunities, Michael is in charge of all the aspects of real estate investments. His geographic focus is on Boston and New York, while his product focus is on multifamily, life science, and industrial properties.

Michael David accepted a job at the Carlyle Group in 2002. Ever since then, he has been involved with various jobs under the group. He executed over 75 transactions with an all-in-capitalization exceeding $3 billion.

Before being a partner at Carlyle, he was a managing director of Carlyle’s NY real estate division. According to the group’s news release, he also served as a director of real estate in Washington D.C. from 2009 to 2014.

Furthermore, before joining Carlyle, Gershenson’s first job after college was at Deutsche Bank. He worked in the bank’s corporate mergers and acquisitions group, Alex, Brown, and Sons. He mainly worked with real estate clients.

Being a part of such a billion-dollar earning firm, Michael Gershenson‘s net worth might also be in the millions. We hope he will gain more success in the coming days and establish himself as one of the most successful American businessmen.

Kate Bolduan’s husband, Michael David Gershenson, is a graduate of Georgetown University’s McDonough School of Business. In Georgetown, he acquired his Bachelor of Science in Business Administration in 2000.

Gershenson is still active at his alma mater. For some years, he is an active member of the Steering Committee of the Steers Center for Global Real Estate at his former university. The Steers Center, where Michael serves, aids students to prepare for their career in real estate by connecting them with advisors within the alumni network.

Mr. Gershenson even praised his former university in a 2015 alumni spotlight feature. He wrote that the business school sets itself apart as the students can earn a finance degree as an undergraduate instead of waiting until graduate school. And, according to him, that was important in his ability to kick start his career.

Michael David Gershenson is a father to two adorable daughters with his gorgeous wife, Kate Bolduan. They are Cecelia Eve Gershenson and Delphine Esther Gershenson.

Furthermore, the married pair, Kate and Michel’s second daughter, Delphine, joined the Gershenson family on 23 December 2017. She weighed in at 6.10 lbs. at the time of her birth. The proud momma, Kate, announced the happy news by sharing a string of photos of newborn Delphine along with her other daughter, Cecelia, via her Instagram page.

Kate Bolduan often shares pictures of her beloved husband, Michael, enjoying his time with his little girls on her social media handles. The pictures uploaded by Bolduan show clearly that Michael David is a great dad, a supportive husband, and on the whole, a dedicated family man.

Raising His Kids With Bolduan In NYC

Kate Bolduan and her significant other, Michael Gershenson, are raising their girls in New York City. Reportedly, the pair resettled to NYC in 2013, after Bolduan got an offer to co-anchor on New Day. According to reports, Gershenson and Bolduan bought their current Manhattan condo together in 2017 for $3.45 million.

Before moving to NYC, Bolduan and Gershenson lived in a lavish home in Washington DC, which they bought in 2010 for $1.36 million. They sold it after relocating to NYC in 2013. Their previous D.C. home was also featured in Home & Design magazine.

So, currently, Kate Bolduan’s husband, Michael David Gershenson, lives a contented life with his family in NYC and focuses on his career in the real estate business. We hope to see and hear more of Gershenson shortly.