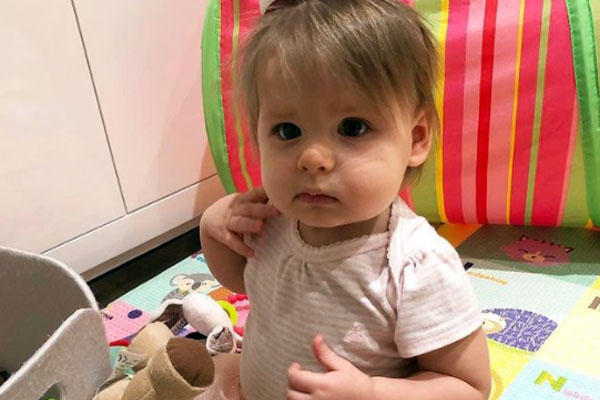 Delphine Esther Gershenson is one of the daughters of the American broadcaster Kate Bolduan, with her husband, Michael David Gershenson. While most people recognize Delphine’s mother, Kate as CNN’s morning show anchor, her father, Michael, is also a successful businessman. Her dad is a partner at a billion-dollar investment firm, The Carlyle Group.

With the rising stardom of Kate Bolduan, her family members are also gaining media attention in recent years. Many are eager to peek inside the family life of the New Day host. So, here, we will be focusing mainly on Kate Bolduan’s daughter, Delphine Esther Gershenson, who is the heart and soul of her family.

Cute Delphine Esther Gershenson is the second and youngest child of the beautiful couple, Kate Bolduan and Michael D. Gershenson. The couple welcomed their younger daughter, Delphine, on Friday, 23 December 2017. Reportedly, she weighed in at 6 lbs. 10 oz at the time of her birth.

Furthermore, the proud momma, Kate, took to her Instagram to share the good news of her little girl’s birth. In addition fellow journalist, Dana Bash also announced the baby girl’s arrival on air.

Delphine’s mom and dad, Kate and Michael, married in a private beach ceremony attended by their close ones in 2010. Besides Delphine, the blissfully married pair has one more daughter together.

As hinted above, Kate Bolduan’s daughter, Delphine Esther Gershenson, has an elder sister, Cecelia Eve Gershenson. Her big sister was born three years before her in September 2014.

Delphine’s big sister, Cecelia, was as thrilled as their parents after her arrival. She was holding her younger sibling in her arms only a couple of hours after Delphine’s birth. Also, Cecelia helped Kate and Michael announce the upcoming birth of sweet Delphine.

Little Delphine shares a great bonding with her older sister, Cecelia. The Gershenson sisters enjoy spending their quality time with each other and love one another so deeply. Both Delphine and her sister, Cecelia, can often be seen having fun together on their famous mom’s Instagram page.

At This Hour host, Kate Bolduan’s kid, Delphine Gershenson, is too young to know about the world. But, at such a young age, she seems to love going on adventures with her family. The little outdoor enthusiast loves ice-skating and exploring nature.

Also, she enjoys going to the beachside with her parents to have some fun playing with sand and waves.

Furthermore, like her big sister, Cecelie, Delphine shows interest in art and craft. Though she is learning to be creative, she loves joining her sister while she does some painting or other similar creative works. Moreover, Delphine also enjoys going fishing with her family now and then.

So, mini Kate Bolduan, Delphine Esther Gershenson, is growing up in an environment full of fun and good memories. Despite being busy, her parents always make sure they spend enough quality time with her and make her feel loved.

We hope Delphine will grow up to be confident, kind, and successful like her mom.

The girl’s name Delphine is of Greek origin, which means dolphin.