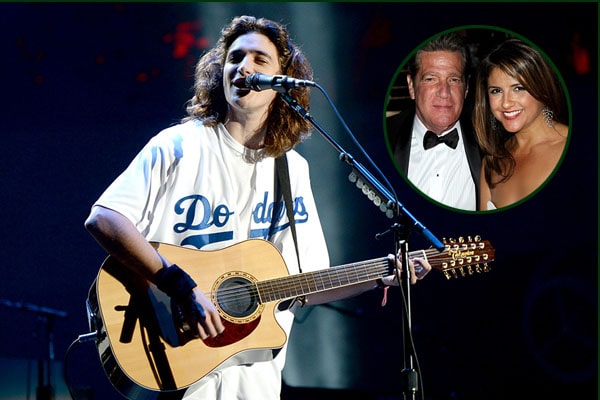 Glenn Frey‘s son Deacon Frey was born in 1994. Glen had his son with his wife, Cindy Millican. Deacon Frey’s parents, Cindy and Glenn, exchanged their wedding vows back in the year 1990 with the participation of only close relatives and friends in a private ceremony. The amazing couple was together ever since until the death of Glenn in 2016.

Deacon Frey Grabbed The Opportunity To Perform With His Late Dad

Glenn Frey’s son Deacon Frey didn’t miss the opportunity to perform with his late father. Not always, but occasionally he used to join his dad on stage during concerts. Their fans appreciated the father and son duo when the two performed together

In June of 2019, the son had paid tribute to his father. Just like a phoenix, Glenn’s 25-years-old son took on the stage with California’s rocking band, The Eagles at Wembley Stadium.

Followed On His Father Footsteps

Deacon seems very much inspired by his late father’s musical career. He is now the official member of his father’s band, The Eagle. Not wasting any time, Deacon respected his dad’s ultimate wish by filling in his place on the group nearly 15 months after his death. The son is surely following his late father’s footsteps all along.

As mentioned before, Deacon Frey’s father, Glenn Frey, passed away on the 18th of January 2016 at the age of 67. The singer passed away due to complications from Acute Ulcerative Colitis, Rheumatoid Arthritis, and Pneumonia. Although Glenn is no more, his mesmerizing songs with amazing lyrics will always be praised and remembered.

It was quite obvious that late singer and the lead vocalist of rock band The Eagles, Glenn had mostly kept the information regarding his children in the shadows. However, Glenn had mentioned to The Chicago Tribune in the year 1993, that he loved spending more time with his children, including his then-infant son Deacon and daughter Taylor, who was two and a half.

The Eagles band member, Deacon, also has an Instagram handle with almost 8.6K followers as of November 2019. Going through his IG account, Deacon mostly seems to be a comic book and manga fan. He also appears to be a sports lover, mostly basketball. He also loves traveling to beautiful locations.

Deacon Frey’s sister Taylor is a mentor and a program director at Individual U. She has also acted in multiple performances, including a sketch comedy called The Dallas Spiders Club. However, the late actor and singer didn’t mention much about his youngest son Otis. Who knows, he might too follow his father and elder brother’s footsteps in the coming days.

Deacon is a masculine name of English and Greek origin, meaning “Dusty one or servant.”