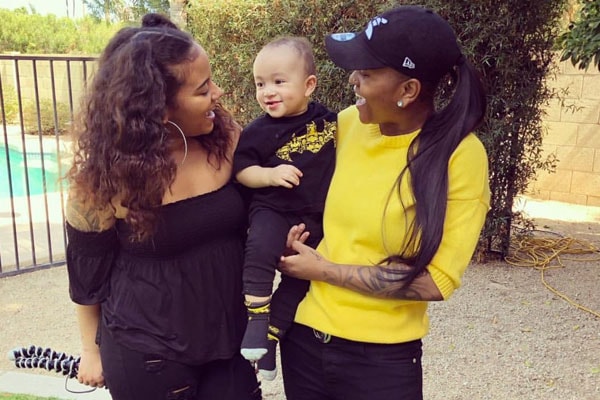 On the 14th of March, the ex-couple of lesbian YouTubers, Domonique (Domo) Wilson and Crissy Danielle, welcomed their son Domonic Christopher Wilson into their family.  Domo and Crissy’s son, Domonic, was born from Domo’s pregnancy.

Domo Wilson is a YouTube star, who is a high-energy performer of music and comedy. She travels o different states of the U.S. and hosts various music events. Plus, Domo also gives motivational speeches at school. Like Domo, her former partner, Crissy, is also a YouTube star.

Domo and Crissy’s Son, Domonic Christopher Wilson Is So Adorable

Domo undoubtedly gave birth to a cute son. When they announced the news of Domo being pregnant, their fans were cherished after hearing the news. Domo and Crissy’s son Domonic was born a healthy child. He weighed about 7 lbs 15 oz and was 20 inches long at the time of his birth.

The broken-up pair planned the pregnancy by working with a local sperm bank. And like what a regular YouTuber would do, Crissy and Domo vlogged the entire process. After the birth, one of the girls stated that just sitting there and staring at Domonic brought tears to her eyes. The ex-couple’s happiness contained no boundaries of joy.

Even if Domonic’s parents are not together, they have decided to work out a custody agreement privately. Along with that, Domo and Crissy have vowed to go on holidays and spend family vacations. Going through Domo Wilson’s Instagram, she frequently posts photos and videos of her son. Well, it looks like Domo is the one who has been taking care of her son right now.

Domo and Crissy’s son, Domonic Christoper, has been diagnosed with autism. Domo Wilson said that she had a hard time to accept the fact that little Domonic was autistic. She thought he’s never going to have friends, and play sports like other kids. She worried about his future but also said he’s the best kid she ever met.

But now, she is over it and is pretty much enjoying being a mother to such a wonderful and adorable kid. Domo Wilson will always be there for her son, and she will do anything and everything for him.

Plus, Domonic also has a YouTube channel named Domonic’s Clubhouse. It has over 333.7k subscribers already with two videos only. Domonic’s YouTube videos show how he spends his time with his mom in the house.

The name Domonic derived from the Latin Dominicus, meaning ‘belonging to a Lord or Master.’ Similarly, Christopher is the English version of the Greek name ‘Christóforos,’ meaning ‘Christ-bearer.’