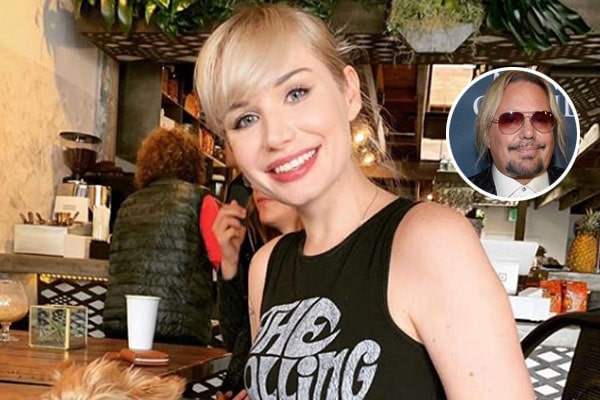 Motley Crue vocalist Vince Neil’s daughter Elizabeth Ashley Wharton was born on October 29, 1983. She is the only child of Vince with his first wife, Beth Lynn. The couple married in 1981, had Elizabeth, but after five years, they divorced.

Elizabeth has two half-siblings named Skylar Lynnae Neil and Neil Jason Wharton from her father’s marriages. Unfortunately, Skyler Lynnae died of cancer at the age of four. In short, Elizabeth is also known as Elle Neil and is married to Will.

Elizabeth Ashley Wharton, the daughter of lead vocalist heavy metal band Mötley Crüe, Vince Neil, is a rockstar like her father. She performs live and plays bass guitar on top of that. Since her father is one of the known singers in the metal music genre, she has followed her father Vince’s steps. Well, we can assume that she became a musician like her father as she must have grown up listening to music all her childhood and teenage days as well.

Looking at Elizabeth’s Instagram, it seems like she is into cosplay, grunge & goth fashion and doing makeup. However, it may have changed as she has not uploaded anything since 2015. She probably wants to live a low profile life without the invasion of cameras in her daily life.  Apart from that, Elizabeth is very close to her father, Vince, and attends his live shows to support him.

We can see that Elizabeth Ashley Wharton grew up with a vast musical influence by her father, Vince Neil. We hope they still keep sharing their thoughts and feelings.

Vince Neil’s Daughter Elizabeth Ashley Wharton got married to her longtime boyfriend, Will Loomis, on October 18, 2014, Santa Barbara. The couple met back around 2010 and dated for quite a long time. Both Vince and Neil are musicians and have performed together multiple times. Maybe it was the same interest in music that made them attentive towards each other and fall in love too. An she is lucky to get married to her best friend and lover., Will Loomis.

Even though Elizabeth is not active on social media platforms, thankfully, Will is providing us with all the updates of their relationship and family life. The couple still seems to have the spark in their relationship despite knowing each other for such a long time. Looking through Elizabeth’s hubby Instagram, we can see that the musical couple still performs and make music together.

We hope that Elizabeth and her husband Will will always be in a great relationship, and do things together, let it be making music together or performing together. We wish only the best for them.

It looks like Elizabeth is the mama of a girl as far as we know, as revealed by father, Vince Neil. And grandpa Vince shared it with the entire world about his granddaughter named Hailee Marie, who was born on January 12, 2015, at 2:28 pm. He even added the details such as baby Hailee weighed 6lbs 12 ounces and 20 inches long.

However, mama Elizabeth does not seems to prefer exposing her baby’s pictures on the internet; neither has Will shared a single snap. Well, we can assume that Elizabeth prefers living in low light despite being the daughter of famous vocalist Vince Neil. But, Elizabeth’s man Will have shared a snap of their cute puppies claiming it to be their babies and part of the family.

We hope Elizabeth is living comfortably with her husband and family.

Elizabeth is from the ancient Greek, meaning “My God Is an oath.” Ashley is derived from the Old English elements: aesc means ash trees, and Leah says to the wood, meadow.