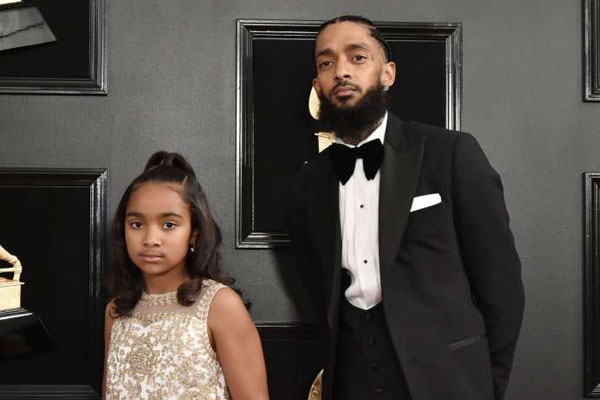 Born in 2008, Emani Asghedom is the eldest and only daughter of Nipsey Hussle, whom he had with his ex-girlfriend Tanisha Foster. As for her siblings, she has a half-brother named Kross Asghedom, Nipsey Hussle’s son, with his then-girlfriend Lauren London.

Well, Emani’s dad, Nipsey Hussle, was an American rapper, activist, and entrepreneur known for his prolific career. On the other hand, her mom, Tanisha, was famous as Nipsey Hussle’s ex-girlfriend. Getting back to the topic, let’s not waste any time and get to know more about Nipsey Hussle’s daughter, Emani.

Unfortunately, Emani’s father, Nipsey Hussle, left the world on Mar 31, 2019. Well, he died after a shooting that happened near his clothing store in Los Angeles. May Nipsey Hussle ‘rest in peace.’ Emani couldn’t bear such sad news of her dad. She probably had difficult times after her father’s demise and had to go through some rough patches of time too.

Before the happening, Nipsey Hussle had tweeted, “Having strong enemies is a blessing.”  It’s still a mystery what the meaning was behind the tweet. Did this accident happen just because of a tweet, or is there some other reason for Nipsey Hussle’s death?

Having strong enemies is a blessing.

But Emani Asghedom will never forget her dad and will always remember him in every stage of her life. Nipsey must be watching her from above the sky.

Before the uncertain demise of Emani’s father, Nipsey Hussle, she was mostly seen with him. Emani had a special bond with her father. Plus, the inseparable father-daughter duo came to the 2019 Grammys. Emani walked alongside her father, Nipsey, on the red carpet. Nipsey also had brought his girlfriend Lauren London, Lil Wayne’s ex-partner, as a companion that night.

Similar to the bond, Emani had with her father; she was certainly also close to her mom, Tanisha Foster. But the things did not favor Tanisha and lost the custody of her child after Nipsey’s death. Meanwhile, custody over Emani was awarded to Nipsey’s siblings, Samuel Asghedom and Samantha Smith. The decision was seen as highly controversial by many.

According to Celebrity Insider, Tanisha Foster did not let Nipsey Hussle’s daughter go home because she was reportedly cleaning the house. And when she tried to visit her grand-dad, he wasn’t answering the door so she was left outside. Perhaps, that seems to have brought a cold relation between the mother and daughter.

Emani Asghedom Is Not A Familiar Face In The Spotlight

Seeing briefly at Nipsey’s Instagram, he has posted only one photo with Emani Asghedom during the recent Grammys. Even Emani’s birthday is yet to be revealed. Perhaps Nipsey Hussle didn’t want his daughter to be familiar with the cruel world of the spotlight.

Even though Nipsey Hussle’s daughter stays away from the limelight and media, she might have been living a splendid lifestyle. Emani Asghedom’s father, Nipsey Hussle, was a well-known rapper in the USA and had earned a considerable sum of money from songs, sponsorships, and so on.

Emani- The word Emani originated from Persian Surname, which is an alternate spelling of word Iman. Iman denotes belief or certitude to the unseen.